Hoi-Poi Capsules, generally referred to simply as capsules, are devices which allow for the shrinking of inorganic objects down to portable size. Capsules are some of the first technologies introduced in the Dragon Ball series by Akira Toriyama, appearing in its first chapter. An earlier incarnation of capsules were included in one of Toriyama's Dragon Ball-prototype-esque one-shots, The Adventure of Tongpoo. 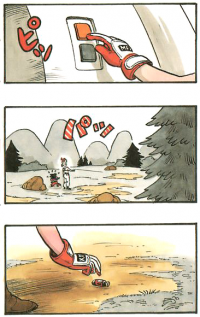 Hoi-Poi Capsules are a key element to the background technology of the series. Each Hoi-Poi Capsule is a numbered cylinder with a button on top. Activating the capsule is achieved by clicking the button and tossing it; the contained object will appear with a "Bom!" sound effect.[1] The expanded capsule can be shrunk again by pushing a button on the expanded object.[2] For safe-keeping, capsules are often kept in a hard case when not in use.[3] The exact process for encapsulation is unknown, though Bulma describes it as shrinking the objects into its component particles.[4] The resulting capsules are light-weight and portable, regardless of how large of an object was placed inside. Although most capsules in the series are only shown to contain the vehicle, house, or weapon that they were designed for, Bulma designed freezer capsules that permitted the cold storage of dead bodies, such as Kuririn's after he is killed by Tambourine.[5] The capsules produced by Capsule Corporation appear to be individually numbered, excepting Trunks' time machine which returned to number one.[6] 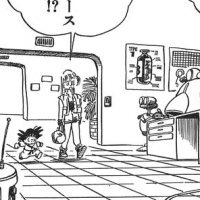 Dr Brief's lab contains an explanation of the parts of a capsule; unfortunately it is too small to read. This area is replicated in the 2020 video game Dragon Ball Z: Kakarot, where it is likewise unreadable.

According to Dragon Ball Daizenshuu 7: Dragon Ball Large Encyclopedia, Hoi-Poi Capsules were invented by Dr. Brief and led to a "Capsule Revolution" around the world, contributing to the easy distribution of luxury goods and allowing for rapid technological progress.[7] Capsule Corporation started with manufacturing capsules, but expanded into creating vehicles and electronics to go into those capsules. Their competitors included the Red Ribbon Army, which was primarily focused on capsules and vehicles for military use. By Age 750, Capsule Corporation controlled the near-majority of the worldwide vehicle market (48%). In addition to capsules, Capsule Corporation also sells popular clothing and electronics brands around the world.[8]

Hoi-Poi Capsules are named for the sounds that are made when the capsules are deployed. In Dragon Ball chapter 1, Bulma shouts "Hoi" (ほいっ) when she throws a capsule, with the sound effect "Poi" (ポイッ) appearing as the sound of capsule in the air. The word "Capsule" for カプセル (kapuseru) is frequently written out in Latin characters throughout the series. 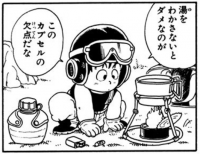 Tongpoo boils a "variety capsule" in The Adventure of Tongpoo.

The concept of capsules was initially explored in Akira Toriyama's one-shot, The Adventure of Tongpoo, originally printed 29 November 1983 in the 1983 #52 issue of Weekly Shōnen Jump as one of a series of experiments ultimately culminating in Dragon Ball. In this science-fiction tale, Tongpoo, an analog for Son Goku, explores a strange planet. By boiling specially designed "variety capsules" (いろいろカプセル iro-iro kapuseru), Tongpoo is able to extract a jet-bike and a house to aid in his explorations, just as Bulma would subsequently do in the Dragon Ball series when meeting Goku for the first time.[9] In Dragon Ball, Toriyama dropped the requirement that the capsules be boiled before use.

Capsules in the Manga

The following items are numbered Capsule Corporation capsules used throughout the series.

The Red Ribbon Army primarily produced capsules for military use.

These items are seen (or implied) to have come from a capsule, but do not show a number. They may have been developed by Capsule Corporation or a competitor. These include items in the series only, not cover pages or auxiliary artwork.

These items are seen (or implied) to have come from a capsule in one of the post-Dragon Ball manga series including Dr. Slump, Jaco the Galactic Patrolman and Dragon Ball Super.

These items are seen or implied to be from capsules in the anime or related films. This list is incomplete.