Kintoki: Toki of the Golden-Eyed Tribe

Kintoki: Toki of the Golden-Eyed Tribe is a single-chapter ("one-shot") manga by Akira Toriyama spanning 31 pages (one color title page and 30 black-and-white content pages) which ran in the 2010 No. 50 issue of Weekly Shōnen Jump, released 15 November 2010 in Japan, as part of the magazine's "Top of the Super Legends" series.

Once upon a time, the Golden-Eyed Tribe were an extraordinary tribe best known for their incredible physical strength and golden eyes. Because of that they were revered as gods of war, but now the clan is slowly dying out due to a short lifespan. And just when most everyone has forgotten about the tribe, a mysterious golden-eyed boy enters the scene...[1] 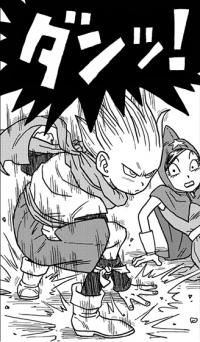 Toki landing near Merluza after hearing a gunshot.

A tribe of golden-eyed warriors, once heralded as gods of war due to their extraordinary abilities, has all but vanished due to their short lifespans.

A young boy with spiky hair and a scarf awakens from a nap, readies his bow and arrow, and snipes a flying lizard out of the sky. Collecting his prize, he sets off dragging it into town.

A young woman with a fortunetelling stand shoos off a passerby questioning if she truly is from Venus as she claims. Around the corner walks the young boy with his "Thundra" prize; the woman refuses to believe he could have captured it due to their incredible speed, so he must have found it already dead. The boy drops it off at what appears to be a butcher shop, clearly having already delivered Thundra here before. The woman scoffs at the 35 zeni offered by the butcher, claiming they have pearls inside them that sell for at least 400. The butcher eventually relents and pays up, with the woman calling for half the profit thanks to her helpful input.

As the two enjoy some sodas, the young man asks if this fortuneteller is indeed female. Since she is, he goes on to ask her to marry him. The boy notices her stand with the Venuisian claim, and wonders if aliens can really marry. The boy explains he is from the Golden-Eyed Tribe, and is probably the last of his kind. When his father passed, the boy was asked to have children to keep the tribe alive, and that his partner did not have to be from the same tribe. He does not mind if she is from Venus, and since his tribe members do not live long (he is 19 years old right now), he would like to get married. The woman, named Merluza, has no interest in marriage right now, so the young man, named Toki, bids her farewell. Merluza wonders if these Golden-Eyed Tribe folks had some kind of special power...

A pompous young man followed by a crew of henchmen arrives at Merluza's stand, not looking for a reading, but looking for a date with such a beautiful young lady. When she refuses, a sword appears in front of her face, begging she watch her tongue in front of "Lord Berry", the 25-year-old son of their feudal lord. Berry pulls a gun of his own on Merluza, noting that if she refuses, he will shoot her in the face. Two men on the sidelines laugh over this, so Berry shoots one of them... though one of his henchmen informs him that it was the other man that was laughing, which prompts Berry to just go ahead and shoot the second man, as well.

In all the commotion, Merluza has disappeared, which Berry thinks to be a special Venuisian ability; she simply ran away, however. Berry orders Raz, his sniper, to shoot her legs, which he does.

Off in the distance, Toki hears a gunshot and a scream, and runs off in that direction.

Raz suggests they depart soon, as the area is known for its Thundra. Berry dismisses this, believing that since it is night they will be resting. Berry is still insistent on his date, but Merluza lets loose with a slew of insults, with the jab at Berry's hair being what ends up making him snap. Berry orders Cran, one of the other henchmen, to kill her. Just as Cran walks in to execute Merluza, Toki slams into the ground from above.

Toki will not let them get away with this. As Berry introduces Cran, the best swordsman in the land, Raz exclaims from the sidelines wondering if this guy is a member of the Golden-Eyed Tribe, a terrifying clan that long ago once had a single member take out an entire army. Berry dismisses this outright, but when Cran goes in to attack, Toki handily dodges the swipes and knocks him into a nearby rock. Merluza remembers: the Golden-Eyed Tribe was known for their incredible fighting prowess!

Toki is ready to take them all on, but one particular member, a man wearing sunglasses named Kuina, steps forward. Kuina gets in a few good swipes, taking Toki by surprise. The two trade a few more attacks and land back down on the ground. Toki wonders, and Kuina confirms by taking off his glasses, that he is also a member of the Golden-Eyed Tribe. Kuina never thought he would see another young member of his clan. While he believes there are no others in this country, Kuina has heard there are five or so others in the eastern lands. Toki wonders if any are young ladies...

Berry yells out for Kuina to finish off the kid, and that he will toss in a huge bonus. Kuina, who at 38-years-old is over the average lifespan of their clan, had figured he would earn some easy money and spoil himself in his "old age", but now realizes that serving Berry goes against his clan's pride, and retires on the spot.

Berry grabs Merluza hostage with his gun, but Toki calmly states that he could easily beat him from this distance. Anyway, they should get on the ground, because a Thundra is coming. The flying thunder lizard swoops down and grabs Berry, dragging him off into the distance. Toki figures not even Berry deserves to be eaten by a Thundra, so he borrows Cran's gun. The Thundra is moving a little slow due to carrying Berry; with the range of 150 meters, Toki times it so he snipes the Thundra in its weak spot over a nearby lake, and tells Cran to go save Berry from drowning. Cran tosses in the gun as payment!

The large henchman, Huckle, offers to carry Merluza to a doctor. Struggling on the ground from his impact earlier, Raz asks to tag along, too. Up on his shoulder, Merluza asks Huckle if the marks on his cheeks are some kind of war paint; he says they make him look slim.

Merluza starts pouring the charm on Toki, saying they could make all sorts of money with his power. Toki turns her down, saying Venusians are a little too scary for him; besides, he might be able to find a female member of his clan now.

With Merluza berating Toki for saying she is scary and for actually believing she was from Venus, the group departs on a grand adventure to find the other members of the Golden-Eyed Tribe. 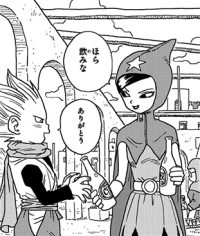 Toki and Merluza share sodas following the sale of the Thundra. 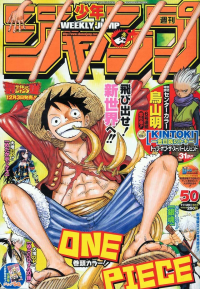 Cover of the 2010 No. 50 issue of Weekly Shōnen Jump featuring Kintoki

Kintoki: Toki of the Golden-Eyed Tribe is one of six one-shots produced for a special "Top of the Super Legends" (トップ・オブ・ザ・スーパーレジェンド toppu obu za sūpā rejendo) series published across the 2010 No. 45 to No. 50 issues of Weekly Shōnen Jump in Japan, with notable Jump authors contributing each individual (and unrelated) short story:[3][4]

Example of the paper and color type from Kintoki's original printing in the 2010 No. 50 issue of Weekly Shōnen Jump 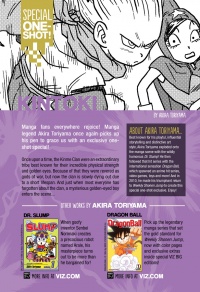 Kintoki: Toki of the Golden-Eyed Tribe is thus far exclusively available in its original Weekly Shōnen Jump 2010 No. 50 printing (spanning pages 151 to 181), released 15 November 2010 in Japan. It has yet to be reprinted or collected with any other material in Japan.

Each manga chapter within any given Weekly Shōnen Jump is typically printed on paper of different color; Kintoki's original serialization is printed on pink-ish/orange-ish paper.

Viz included Kintoki (as "Kintoki: Toki of the Kinme Clan") within the 28 January 2013 issue of the company's Weekly Shonen Jump digital publication.[10] The issue was available individually for $0.99 or as part of a $25.99 annual subscription. Like its original Japanese release, Kintoki has not been regularly made available outside of its original serialization; it has, however, occasionally been included as part of all-inclusive, significantly-larger digital Dragon Ball manga bundles.[11] No official English-language print release currently exists. The translation for Kintoki at Viz was handled by Alexis Kirsch, with editing by Andy Nakatani, and lettering by Steve Dutro.[1]

Piracy group Manga Stream released a "scanlation" of Kintoki in 2010 under the title "Kintoki: Toki of the Aurumoculi". The scanlation features the occasional odd translation and spelling choice. Of note:

Merluza appears in the bottom-left of the title page to the fifth chapter of Akira Toriyama's 2013 Dragon Ball prequel series Jaco the Galactic Patrolman.[12]

Each issue of Weekly Shōnen Jump includes a comment from that issue's respective authors. Toriyama's comment in the 2010 No. 50 issue is as follows:


Doing my first comic in a while in the midst of being busy already was really tough! The cartoonists who draw this sort of thing every week are really awe-inspiring.
— Akira Toriyama