Saikyō Jump (最強ジャンプ Saikyō Janpu; styled as "Super Strong Jump" in its earliest issues, and often called "The Strongest Jump") is currently a monthly magazine published both in print and digitally in Japan by Shueisha, originally launched as a joint publication between Weekly Shōnen Jump and V-Jump[2]. The magazine's focus is spin-off and supplementary manga series aimed at a young audience, while also including game promotions, news coverage, and more.

Saikyō Jump launched 03 December 2010 (then as a quarterly publication). Issues in the current, monthly publication format are forward-dated for the next month and are released on the fourth day of the prior month. 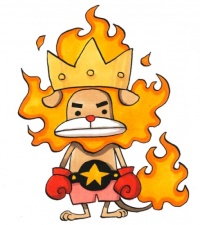 A mascot for the magazine — later named ファラオン Faraon — was designed by One Piece's Eiichiro Oda.[3]

Beginning in 2012, Shueisha's Saikyō Jump and V-Jump magazines began hosting a special summer fan/media/promotional event called "Saikyō V-Jump Festa"[a], held once each in Tokyo and Osaka in July. The event continued in 2014 under the new name of "Jump Victory Carnival" which continues to this day, though no event was held in 2020 due to the COVID-19 pandemic.[8]

Saikyō Jump's primary focus is juvenile, spin-off adaptations of popular Jump series such as Dragon Ball, One Piece, Naruto, Toriko, Katekyō Hitman Reborn!, etc. New authors and artists are recruited to produce these works, rather than the respective series' original author. These new artists may move from one series to another as series conclude or are cancelled in favor of others; for example, Katsuki Hirose's Dragon Ball Discross Divine Power God MAX!! ran for 11 chapters (concluding in the November 2016 issue) and was replaced with a new Digimon comic by Hirose that same issue, while Hiroshi Otogi began DeSpo FighterZ (starting in the September 2018 issue) shortly after the end of Dragon Ball Fusions the Manga!! (which concluded in the May 2018 issue).

Similar to Weekly Shōnen Jump, the various manga series are each printed on a different colored shade of newsprint-like paper. Certain series and special chapters, such as all mainline Dragon Ball SD chapters, are printed in full-color on semi-glossy paper.

Each issue concludes with a page of brief (generally one- to two-sentence) comments from all of its respective manga contributors.

The following ongoing series currently run in Saikyō Jump (as of the October 2022 issue; additional one-shots may also be published in any given issue):

Saikyō Jump's initial quarterly publication ran through four chapters of Dragon Ball SD by Naho Ooishi, with each chapter retelling a training or overall story arc from the life of Son Goku. The series received a reboot in the first monthly publication, effectively starting over at the very beginning of the original Dragon Ball series. The series remained a Saikyō Jump tent-pole through the May 2021 issue, at which point the series was cycled out of the print publication (ahead of that summer's hiatus and refresh), switching instead to an online-only YouTube version.

Saikyō Jump occasionally reprints single chapters for other supplemental Dragon Ball material, such as Neko Majin, Episode of Bardock and The Case of Being Reincarnated as Yamcha.

The following series are currently running on a regular monthly schedule in Saikyō Jump:

The following series are currently running on a regular schedule in online/digital-only offshoots of Saikyō Jump:

The following series have concluded after running their course in Saikyō Jump:

The following series saw a single chapter printed which eventually led to a proper serialization later in Saikyō Jump:

Short chapters or special appearances by other authors featuring the Dragon Ball characters:

Short chapters or single-page cameos from series published in other Shueisha magazines (such as V-Jump) occasionally appear in Saikyō Jump. 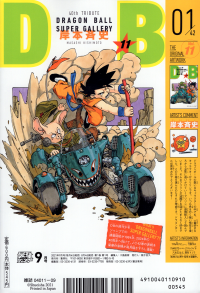 Beginning with the magazine's September 2021 issue refresh, and looking ahead to the series' 40th anniversary in November 2024, each issue's back cover began featuring different artists all contribute their own spin on the original 42 tankōbon covers along with a respective comment in a new "40th Tribute Dragon Ball Super Gallery".[41][42] 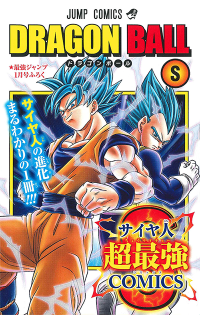 Certain issues of Saikyō Jump come packed with supplemental booklets, cards, and occasionally larger bonuses such as DVDs... or even winter gloves.[43]