After the conclusion of the Dragon Ball Z anime in 1996, Dragon Ball GT continued the franchise’s story with an original story developed by the team at Toei Animation. Running for a total of 64 episodes and one TV special, it was the shortest of the three TV series, bringing things to a close in November 1997. But now, it is set to receive an “anime comics” adaptation in monthly serial form.

The December 2013 issue of Saikyō Jump in Japan has announced that Dragon Ball GT will finally be receiving an “Anime Comics” release of its own, and specifically mentions the upcoming “JM” or “Ja’akuryū Mission” (“Evil Dragon Mission”) update to Dragon Ball Heroes, saying that that the two are linked. 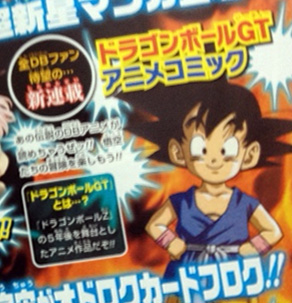 Most of the animated Dragon Ball productions not based on an original manga have received “Anime Comics” over the years, taking screen shots and arranging them into manga-form with dialog bubbles. All of the movies and TV specials came out from 1992 through 1997 (wrapping up with the Dragon Ball GT TV special), and even more recent products like the 2008 Jump Super Anime Tour Special and Battle of Gods have received them.

Over the course of 2005-2010, the entirety of the Dragon Ball Z TV series received an equivalent “TV Anime Comics” release broken up across eight arcs and 39 total volumes.

The exact nature of the Dragon Ball GT “anime comics” has not been confirmed, but it is likely that they will be largely identical to the other “anime comics” releases in format. The adaptation will launch on 04 December 2013 in the January 2014 issue of Saikyō Jump, creating a monthly “double-header” of Dragon Ball manga alongside Dragon Ball SD.