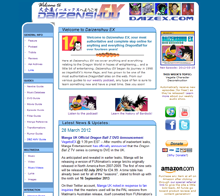 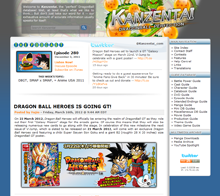 We had been jokingly using the name “Kanzenshuu” as a fusion-esque name for our collaborations for a few years, and the names do work together even better than anticipated. The 全 (zen) — present in both daizenshuu and kanzentai — means “whole” or “complete”, something both sites had always strived for in their all-encompassing coverage. We took the 完 (kan) from kanzentai (meaning “perfect”) to start with and took the 集 (shuu) from daizenshuu (meaning “collection”) to end the name. All together, the new name of 完全集 (kanzenshuu) refers to a sort of “perfect collection”, which is what we always envisioned the site to be.

Our mission and goal continues to be to spread our love and enjoyment of the original Japanese version of the Dragon Ball franchise — the single version that can be and is enjoyed across the entire planet by all types of fans — with the most accuracy and cited documentation that we can, all wrapped up in an entertaining package. We do this through our global news coverage, extensive guides, our podcast, expert commentary, and our community collaboration.

Kanzenshuu is very much a relic of the Internet past: we are not a company, this is no-one’s job, we do all of this in our spare time, we do not run advertisements on the website, there are no salaries, we do not work for or with any companies/rights-holders, and all of our “job titles” are completely meaningless and made up on the spot. We are just a small group of friends that believe in and love doing what we do, which is documenting the rich history of Dragon Ball for ourselves and for others, but enthusiastically doing so to a degree above and beyond what it may perhaps even warrant.

This is just a fansite, and we wouldn’t have it any other way.

The staff of Kanzenshuu bring decades worth of combined experience, expertise, and fandom from their prior work on Daizenshuu EX and Kanzentai.

News & Marketing Manager / Podcast Host
Having been aware of the franchise for years via the back of Electronic Gaming Monthly, it took prodding from a friend in high school for Mike to be bothered to actually check the darn thing out, and subsequently catch the second episode of FUNimation’s original English dub of Dragon Ball Z in September 1996. Before getting his own Internet-ready computer in 1997, he spent countless hours and days absorbing everything he could from BBSes and early websites such as Wuken’s Suushinchuu.
Mike started VegettoEX’s Ultimate DBZ Links Page on AOL in January 1998 at the ripe old age of sixteen. The goal at the time was not to reinvent the wheel by duplicating the efforts of other Dragon Ball fans that already shared news, information, and media, but to simply link to the best-of-the-best and act as a sort of jumping-point. He moved into producing original content a few months later, though, and expanded the site into VegettoEX’s Home Page. The site re-launched in 1999 yet again as Daizenshuu EX with a new name and a new focus on great content with a great personality. The site re-launched yet again in 2003 with a greater focus on documentation and engaging content, which included the weekly podcast beginning in November 2005.
Mike lives in New Jersey with his wife and cats. The name “VegettoEX” came from wanting to choose the strongest character as a representation in crummy AOL chat rooms, combined with some extra letters to at least differentiate the name from the gazillion other terrible screen names — the “EX” came from a then-current-obsession with Street Fighter EX, which Mike defends to this day as an excellent game.

Content Manager / Website Development & Maintenance
After being turned on to Dragon Ball Z via TV by a childhood friend in mid-1997, Heath quickly ran to his family’s Windows 95 PC with dial-up internet and absorbed as much information about the series as possible (and there really wasn’t much available at the time). Over the next few years he bookmarked every fansite you could find, including Planet Namek, Vegeta Insane, Greg Werner’s Ultimate DBZ Information Site, and of course VegettoEX’s Home Page.
Inspired by these great fansites of the past, he set out to learn the ways of website development. After teaching himself HTML and JavaScript, he created his own run-of-the-mill Dragon Ball fansite to document the series for his own personal reference, which to this day remains anonymous. He eventually closed the website, but continued to maintain it locally on his personal computer. As the Japanese Dragon Boxes were being released in 2003, Heath (now in college) decided to dust off his old website files and began reworking the site to revolve around these glorious releases. In early May 2005, after the age of large fansites had almost entirely passed, he launched Kanzentai to bring his detailed information to the masses.
Heath is better known online by his handle, “Hujio”, a name he made up too long ago to even remember what it is actually based on. But hey, it starts with an “H”. He currently resides in Nebraska with his wife and children, all of whom do a great job of pulling him away from doing website work.

Translator / Japan Correspondent
Julian’s fandom began in earnest with reruns of the first two “seasons” of FUNimation’s early Dragon Ball Z dub in syndication, but he quickly moved on to bigger and better things. Wanting to know what happened next, and being annoyed at the incredibly obvious censorship, he eventually turned to the Internet. Once there, he cut his teeth on sites like Chris Psaros’s DBZ Uncensored, Greg Werner’s Ultimate DBZ Information Site, and (of course) Mike’s own Daizenshuu EX.
Becoming a regular poster on the alt.fan.dragonball newsgroup, he wound up writing a petition to reverse the censorship of Viz Comics’s release of the manga, which garnered the attention of the company, as well as the English-speaking online fandom. Soon enough, Julian and Mike (who had taken a break from the site) were corresponding with each other semi-regularly, and he came on board for the relaunch of Daizenshuu EX in 2003. Banking on his enthusiasm for the Japanese language, he became the site’s official translator and fact-checker, and eventually managed to be able to understand and speak Japanese for real. He studied in Japan in 2006 and moved there outright in 2007, becoming the “Man in Japan” who keeps everybody informed about the latest developments in the Land of the Rising Sun—at least when the aforementioned Internet does not beat him to it. He now lives back in New York with his wife and children, the latter of whom he hopes to groom as his successors. (They are already native Japanese speakers…)
“SaiyaJedi” is a whittled-down form of his old Usenet handle, “The Super Saiya-jin Jedi”, which combined his two loves as a teenager: Dragon Ball and Star Wars. He has thought about getting rid of it before, but eventually decided to keep the name as a badge of honor (and a reminder that everyone was 13 once). You can still call him “Julian”, though.
Julian has passed the highest level of the Japanese Language Proficiency Test (JLPT).

Translator / Head Researcher
Jake “Jacob Schultz” Schutz was born in a previous century somewhere around the American Midwest, the same place that gave the world “Cashew Chicken” and Harry S. Truman. In retrospect, the warning signs were obvious: while still in grade school he imported a Digimon Wonderswan game from Japan and learned katakana in a vain attempt to understand it. In high school he finally took a crack at learning the other 99.9% of the Japanese language, as part of a ridiculously intense summer school course that compressed a semester or two of college Japanese into two months. In college he took a bunch more Japanese courses and eventually spent a year living in Tokyo, where he wandered around the suburbs aimlessly and climbed Mt. Fuji, in that order. Since graduating college he’s continued to study Japanese on his own, but has a bad habit of focusing only on the parts that interest him, which is why he knows five different words for “magic” but has trouble remembering how to say “you’re welcome”. He currently lives by the Pacific Ocean, working for “The Man”.
Rewinding a bit, around the turn of the century he caught a few scattered clips of Dragon Ball Z on TV, which left him with the impression that Goku was a spaceship captain and/or some sort of Catholic saint. To clear the matter up he turned to the Viz manga, and before he knew it he was tracking down the daizenshuu guide books and collecting kanzenban. The middle step is still kind of a blur. In college he started posting up information from the daizenshuu on the Daizenshuu EX forums (appropriately enough), when Hujio offered him the recently vacant translator position at Kanzentai. He accepted and obligingly translated a few daizenshuu, but still put more effort into posting random guides on the Daizenshuu EX forum than on doing anything for Kanzentai. And so plans were hatched to merge Kanzentai and Daizenshuu EX together…
“Herms” is simply the name of the Greek god Hermes minus the second ‘e’. Back during that fateful summer school session, he had originally signed up to take a class on Greek mythology before switching to Japanese at the last minute, and so he still has trouble spelling the names of the Greek gods. OK, so there actually is a reason behind this spelling, but it’s long, makes little sense, and still just boils down to “it seemed like a cool-sounding screen name”.
Jake has passed the highest level of the Japanese Language Proficiency Test (JLPT).

The following contributors, while not responsible for owning and operating Kanzenshuu, dedicate and volunteer their own time and talents to help assist in developing various aspects of content creation.

Translator
Stacey has been a friend of the site since before Kanzenshuu itself was even a twinkle in our collective eye! Stacey is certified at the N2 level of the Japanese Language Proficiency Test (JLPT), and along with the occasional day-to-day news coverage assistance, dives into our archives to help share interviews and articles that have yet to be translated. There are very few people whose language and translation proficiency we have full confidence in to live up to our completely unreasonable standards, and with the addition of Stacey to our family, they all work on Kanzenshuu.

Animation Production Documentation
Originally joining our forum community in 2013, Ajay quickly became a great friend of the site, as well as a well-versed authority on the production process and going-ons as Dragon Ball Super ran through to completion. In 2016, Ajay took on a bit of formal responsibility as a moderator on our forum. Alongside that existing role, Ajay works throughout the “Production Guide” and various episode pages to cite concrete, verifiable information about specific animators, production anecdotes, and more.
«
»
Connect With Us
Support Us
Your support for Kanzenshuu is what keeps us going. You can help by donating to us directly, or by shopping online at certain retailers through our affiliate links below. Every bit counts and helps contribute to our server fees and bringing you new site content, reviews, and contest items.