The Dragon Ball series begins its adventurous tale on the small blue planet named Earth, and for some time this is the “Dragon World” that Son Goku and friends know. Things quickly change as Goku trains under Earth’s God, learns of his alien heritage, and receives further training under Kaiō in the Heavenly Realm. Goku and friends soon find themselves leaving Earth and traveling off into the far reaches of the universe in search of the Dragon Balls on Planet Namek. Along the way they encounter numerous other alien species, both good and bad, and learn just how expansive and diverse the universe truly is.

As the series progresses and the “Dragon World” continues expanding, a bureaucratic, hierarchical system of gods begins to take shape. The majority of these godly posts spend their years overseeing a certain segment of the world or universe, with its inhabitants utterly unaware of their existence. Their main duty is to simply observe the sentient lifeforms within their regional jurisdiction, ensuring everything is running smoothly and nothing too terrible is happening. While their godly titles carry authority and respect from many, a number of gods are far from being the most powerful beings in the universe.

In contrast to these gods of the Heavenly Realm, there are those that exist with evil in their hearts. These demons typically hold nothing but nefarious intentions and reside in both the Living and Demon Realms. Similar to the gods of the Heavenly Realm, there are quite a few different kinds of demons that appear throughout Dragon Ball, which are more further detailed in the “Demon Guide”.

The main portion of this guide has been divided into three sections, with each detailing a specific aspect of the “Dragon World”. The first section details the hierarchy of gods established in the series, examining each position’s responsibilities, requirements, and general involvement in the series. The next section examines the universe’s setup, which is divided up into various realms between the living, the dead, and the divine. The final section (still in-progress) lists the different intergalactic locations seen, visited, or mentioned in the series. 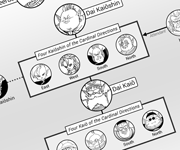 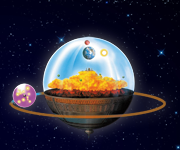 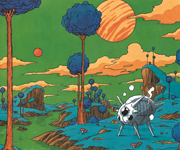 These supplemental “mini-guides” provide additional coverage of other more specific topics regarding the “Dragon World” not covered in the preceding sections, including an overview of the concept of gods and religion in the “Dragon World”, a detailed look at the governing rules of death and the afterlife in Dragon Ball, a dissection of the various Dragon Gods that appear throughout the franchise, and an examination of the long-standing confusion over the exact number of galaxies in the universe.