The various dragons summoned from the Dragon Balls are all referred to as 神龍 (shénlóng in Mandarin Chinese, shenron in Japanese), meaning “Dragon God” or “Divine Dragon”. While the Japanese pronunciation of the term is shinryū, the series retains and specifically indicates an approximation of the original Chinese pronunciation. While not Gods themselves — at least not in the sense of holding an actual position within the main hierarchy — these dragons boast magical powers granted to them by their creators. Dragon Gods are given life by their creators breathing energy and a soul into a representative model of the dragon, ultimately linking the two’s life force together; if the creator dies, their Dragon God dies as well, but not vice versa. This also sets certain limitations on the dragons, as they cannot grant wishes that exceed their creator’s own abilities or powers. For instance, asking Earth’s Shenlong to “destroy someone more powerful than God” is unfeasible. The creators can also adjust their respective Dragon God’s power and abilities as their own power changes. 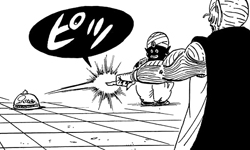 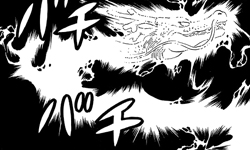 Shenlong Emerges From the Dragon Balls

It is noted in the “What’s the Dragon Ball?” section of Daizenshuu 4 that Shenlong is — and presumably all Dragon Gods are — sealed within the seven Dragon Balls themselves, and bursts forth from them when called upon.

Inside the seven balls is sealed a dragon called “Shenlong”. If all the balls are gathered, Shenlong will appear and grant any wish or desire of the person who called upon him.
— “Dragon Ball Daizenshuu 4: World Guide” (p. 30)

Also according to Daizenshuu 4, a Dragon God utilizes its own energy to grant wishes and must return to the Dragon Balls for a fixed period of time to build-up its energy again. In the case that a Dragon God can grant multiple wishes, but not all of the wishes possible are used, the time needed to recharge is proportionally reduced. During this time the Dragon Balls remain in a state of hibernation and appear as ordinary stones. Once their power has been regained, the Dragon Balls return to their normal state and await their next use.

The first Dragon God introduced in the series is Earth’s Shenlong, created by Earth’s God to give his people courage and hope, but as he explains in chapter 165, the people of Earth did not use the Dragon Balls for good things, but rather just out of greed. Planet Namek’s Shenlong, Porunga — whose name means “god of dreams” in Namekian — is created by the eldest Namekian. Daizenshuu 4 notes that just like the size difference of the planet’s Dragon Balls, Namek’s Shenlong is approximately five times larger than Earth’s Shenlong.

In Dragon Ball GT, Ultimate Shenlong (究極神龍; kyūkyoku shenron) is introduced as a Dragon God created by the child of Katatz prior to expelling the evil from his heart (creating the Demon King Piccolo) and becoming Earth’s God. Ultimate Shenlong, which according to Dragon Ball GT: Perfect File Vol. 1 is at least ten times the size of Earth’s normal Shenlong, is summoned from the Ultimate Dragon Balls that have been hidden within the bowels of God’s Temple. Once a wish has been granted, the Ultimate Dragon Balls are scattered across the entire universe and must be returned to the location from which the wish was granted within one year, or that planet will explode. 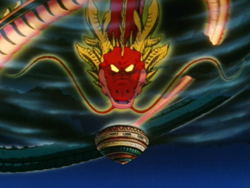 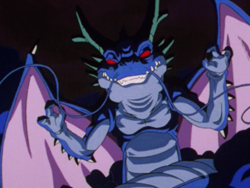 The “Evil Dragons” (邪悪龍; ja’aku ryū) also appear in Dragon Ball GT; however, these dragons are not Dragon Gods (i.e. Shenlong), but rather dragons created from the “Minus Energy” that had accumulated in Earth’s Dragon Balls after repeated use within such a short period of time. These dragons represent each of the seven Dragon Balls and are each singularly referred to as a “Star Dragon” (星龍; xīnglóng). The “Black Smoke Dragon” (黒煙の龍; kokuen no ryū) that initially appears from cracks in the Dragon Balls is an accumulation and physical manifestation of the Dragon Ball’s “Minus Energy”, before splitting up and scattering the seven evil star dragons across the planet. 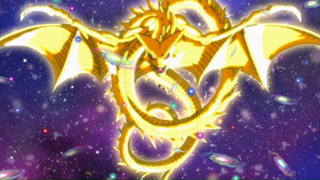 There appear to be limits on the amount of time a dragon — or perhaps certain types of dragons — may remain summoned. Earth’s Shenlong appears impatient at times throughout the series as characters deliberate on additional wishes; Dragon Ball Z movie 12 ends on a humorous note with Shenlong still waiting on an additional wish. In Dragon Ball Super episode 68, Shenlong is seen acting not just impatient over a final wish decision, but seemingly unable to actually hold on to his summoned status. Unable to wait anymore, he takes off and the Dragon Balls scatter across the Earth, prompting Goku to apologize to Kaiō and promise to revive him “next time”. 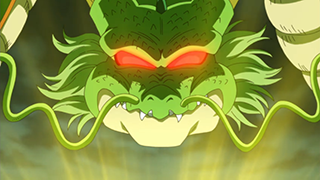