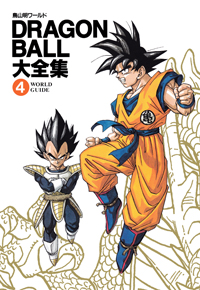 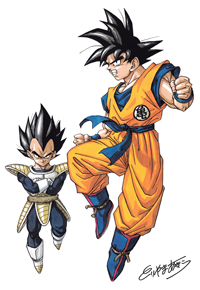 The fourth daizenshuu covers everything that has to do with the “Dragon World” that Akira Toriyama had created. This includes everything from outer space, to characters, to technology, and even the Dragon Balls themselves. Included before the table of contents is an introduction message from Akira Toriyama and the guides title page, which features the illustration from 1986 WJ #5. The book also features a beautiful foldout poster of the guides respective cover image drawn by Akira Toriyama. On the opposite side of the poster are countless rough sketches by Toriyama-sensei himself. These include sketches of North Kaiō, Mister Popo, Cell, teenage Son Gohan, Majin Boo, Super Saiyan 3 Son Goku, Mister Satan, and an outline of the Dragon World drawn as a reference for the anime staff.

Toriyama’s Introduction (read translation)
013
World
015
Prologue
016
The world prologue contains full colored pages of the Dragon World. A couple pages showcase the Other World outline and the Heavens (North Kaiō’s Planet, Kaiōshin’s Planet, and Serpent Road), while the remaining pages look at the universe (Namek and Freeza’s Planets) and the various sections of Earth (North, South, East, and West).
What Are the Dragon Balls?
030
In this section we get an in-depth look at the Dragon Balls and their properties. Such as, size difference, wish limitations, time between successive summonings, and wishes per summoning. It also provides information about both dragons (Shenlong and Porunga), their creators, and their individual limitations. A separate page displays a list of all 14 summonings along with all 22 wishes.
Racial Groups
037
Characteristics
040
This section showcases a thoroughly detailed look at the various races that appear within the Dragon World. The racial groups included are: Saiyans, Namekians, People of the Heavens, Freeza and his Followers, Bobbidi and his Followers, and Earthlings (Martial Artists, Humans, Animals, and Monsters). Each racial group is then broken down further, providing hierarchy details, race specific abilities, and background information.
Field
071
Places Besides the Earth
072
Even though the majority of Dragon Ball takes place on Earth, Akira Toriyama often turned to the rest of the universe for new enemies and inspiration. This two page spread shows the different locations throughout the universe and heavens. Each location’s name is provided, along with a short description and any specific characters from that area.
The Earth
074
Akira Toriyama left nothing to the imagination and completely re-mapped the Earth in the Dragon World. This section takes a look at this map, which has been broken up into 12 areas (A-1 to C-4). Each area is given its own page which displays locations of major events, cities, landmarks, and characters that are associated with them.
Chapter 081 – Chased to Penguin Village!
091
It’s always a special treat when you can read a Dragon Ball chapter in full color, which is exactly what we get! You have to remember that at the time this was released there wasn’t even a thought about a kanzenban release, so no colored chapters were available unless you still had original copies of Weekly Shōnen Jump. This chapter showcased the intermingling of Toriyama’s World between Dr. Slump and Dragon Ball. What could be better?
Grapple
107
Classification of Attacks
110
Though not a complete list of attacks, this categorizes certain attacks into three groups; mind power attacks, body attacks, and emergency attacks. These three groups are further divided into various sub-groups. It also provides brief descriptions of these attacks and lists who has used it.
Competition
118
If there was ever anything you wanted to know about the Tenka’ichi Budōkai, this is where you’ll find it. The first page lists all the rules for both the preliminary rounds and the final rounds. Following that, each individual Budōkai is given its own page with a thorough breakdown of each fight. It also lists the number of participants, the champion, and the most dramatic event of the tournament.
Machines
125
Blueprint of Functional Machines
126
This section provides classification of all machines used in the Dragon World. The categories include cars, air cars, bikes, air bikes, planes, anti-gravitational aircraft, boats, submarines, spaceships, alien spaceships, and time machines. Each machine has a brief description, along with Toriyama-sensei’s own comments about each machine. We’re also given a list of all four vehicles that Akira Toriyama used in the manga that actually exist in the real world. Though it doesn’t quite fit, we’re given a special look at Mister Popo’s Magic Carpet and Kinto-Un in the “Wonder Selection”.
Technology
145
Technology & Supernatural
148
This section opens with a nice circular table of the different types of technology found in the Dragon World. The main categories include Bulma’s Inventions, Dr. Brief’s Inventions, Scientific Items, Weapons, Defensive Gear, Robots, Androids, and Supernatural Items. Some categories are further divided into sub-groups and each item is accompanied by a full description and a note of the different times they’re used within the series.
Akira Toriyama Super Interview (read translation)
164
This is a five page interview with Akira Toriyama on 24 July 1995 at the Kanazawa City Sight-Seeing Hall in Kanazawa, Ishikawa, Japan. In the interview Toriyama discusses the world of Dragon Ball, including the difference between the Earth in Dragon Ball and the real Earth, the scenery for battle scenes, the names of special techniques, and his making of the complete world map.
Akira Toriyama’s Best (read translation)
These pages include fun Q&A’s with Akira Toriyama about different aspects of the series. Some questions include; “If he could be reincarnated as a character, who would it be? (Trunks)”; “What is your favorite technique? (Bukūjutsu)”; “What is your favorite place/location? (Karin’s Tower)”; “If you could take one thing from the Dragon Ball world, what would it be? (Hoi Poi Capsules)”; “Which artifical human design was your favorite? (Cell, 2nd Form)”. 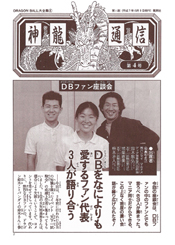 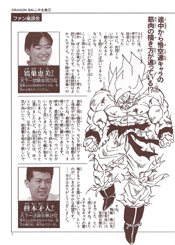 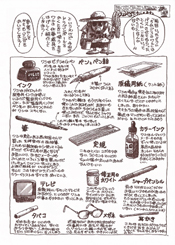