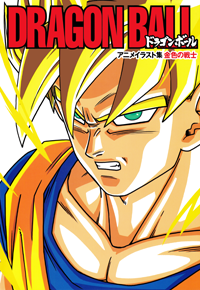 The book’s dust cover was drawn by veteran animator Katsuyoshi Nakatsuru, who was also interviewed in the book. Although it may not be noticeable, the darker parts of Super Saiyan Son Goku’s hair on the dust cover are a reflective gold color, emphasizing the book’s title. When the dust cover is removed, the softcover is revealed to be Goku’s dōgi with his “Go” kanji symbol. The front of the dōgi corresponds to the front of the book, and the same is true with the back of the book.

Unlike most Dragon Ball books, this illustration collection does not come with a fold-out poster. However, the first two pages feature a beautiful photograph of a chinese lake with mountains in the background which is said to be the inspiration for the place where Goku lived before he met Bulma (Mt. Paozu). From there the book is split up into three sections, one covering each anime series (DB, DBZ/Kai, and GT), with the movie illustrations included with their respective series. The book’s content focuses mostly on Son Goku, but there are some non-Goku illustrations included. To wrap things up, three interviews can be found throughout the book, all of which were conducted with character designers from each series. 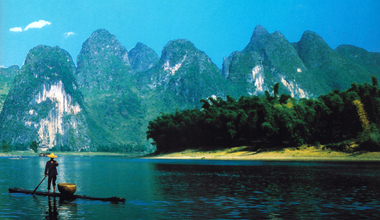 It should be noted that although Akira Toriyama is listed as the author of this book, he had absolutely no involvement with the production of its content. The contents of this illustration collection were compiled and organized by the numerous companies listed below.