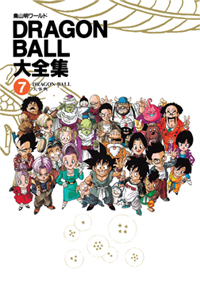 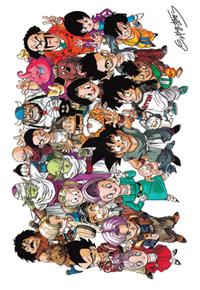 The seventh daizenshuu is a collection of dictionaries that cover almost every aspect of the Dragon Ball manga series. Unlike the most of the previous daizenshuu, the vast majority of the book is printed in grayscale and is heavily text-based. Besides exhaustive dictionaries, this daizenshuu also contains some rare Akira Toriyama illustrations and comments never printed outside of Weekly Shōnen Jump, illustration reprints from the chapter title pages, a detailed look at much of the series’ merchandise, and an exclusive thank you message to fans. Included before the table of contents is an introduction message from Akira Toriyama and the guides title page, which features the illustration from chapter 519, the final chapter of manga series. The book also features a beautiful foldout poster of the guides respective cover image drawn by Akira Toriyama. On the opposite side is a character relationship poster that showcases many of the characters Son Goku met along his grand Dragon Ball adventure. 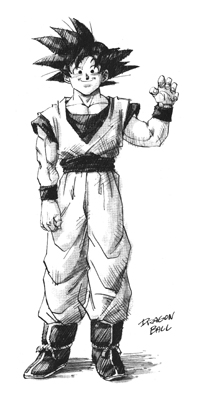 As a special bonus for buying the daizenshuu, Shueisha included a small newspaper type pamphlet called the “Shenlong Times”. Within each of these 8-page pamphlets, there were interviews with staff members involved with Dragon Ball, Akira Toriyama, and fans from Japan. In the center of each pamphlet there was usually a short comic drawn by Toriyama detailing part of his life following the completion of series, or a tribute to Dragon Ball by other artists, similar to what was done with the kanzenban. Also in each pamphlet is a “Dragon Ball News” section that showcased “new” and upcoming Dragon Ball merchandise. There’s also a section called “I Love Dragon Ball”, in which famous people from Japan (or China), who love Dragon Ball are interviewed. 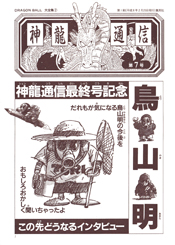 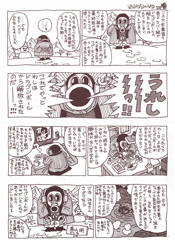 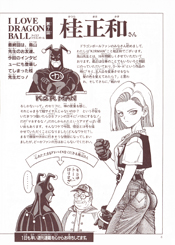 The final page features a complete listing of staff credits for the entire set of daizenshuu books.