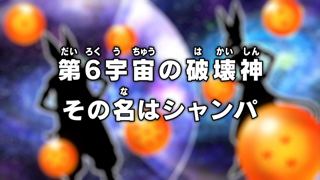 The 6th Universe’s God of Destruction — His Name’s Champa

One day not long after the battle with Golden Freeza, Goku and Vegeta are continuing their training under Whis’ guidance on Beerus’ planet. They both wear incredibly bulky, heavy suits, and are doing one-finger “push-ups”, lifting their entire body up with just one finger. Whis sits off to the side, casually sipping some black tea from Bulma. Vegeta thinks to himself that wearing these suits is harder on the body than being in Bulma’s latest gravity training room. Just as the two are approaching 50,000 push-ups, something suddenly crashes into the planet, causing them to topple over. Whis is annoyed at how “they” always pop in without any forewarning, making Goku wonder if people were the cause of the crash. Beerus wakes up from all the noise, which he blames on Goku and Vegeta, and begins firing ki blasts at them.

It turns out that two people have indeed crash-landed on the planet: Champa and Vados. The two watch the explosions at Beerus’ castle off in the distance, and Vados asks why they could not have made a closer and gentler landing, but Champa insists that an important guy like him has to make a flashy entrance. As the two walk the rest of the way to the castle, Champa starts sweating heavily. Vados tells him he is too fat; if they do not walk faster, they will never make it. Champa chugs down a sugary drink, while Vados warns him to drink those in moderation. Champa protests that he walked so much that his net calorie intake is zero. Vados corrects him, explaining that he would need to skip dinner and tomorrow’s breakfast to break even.

The two finally reach the gate, and just as Champa is about to knock in a suitably flashy manner, Beerus explodes through the door, still chasing after Goku and Vegeta and firing ki blasts everywhere. Covered in soot from all the explosions, Champa calls out to Beerus… who does not recognize him until he wipes his face off. Champa complains about Beerus firing blasts at him without any warning: “I could have died!” “So what?” As the two continue to bicker, Goku and Vegeta watch from the sidelines, wondering who this newcomer is. Inside, everyone sits around a table and continue the discussion. Champa is curious who Goku and Vegeta are, and Whis explains that they are his disciples, though still so inexperienced that they go down after just 50,000 push-ups.

Goku likewise wants to know who Champa is, and Vados explains that he is Beerus’ twin brother, the God of Destruction Champa. Vegeta is confused: there are two Gods of Destruction? Vados continues that Champa is not the God of Destruction for this universe, but rather for Universe 6. Goku interrupts, asking who is stronger, Champa or Beerus? Vados says that one has only to look at their respective physiques to figure that out, which greatly offends Champa. Finally getting around to business, Champa explains that he has come to make Beerus feel true, paralyzing despair, and tells Vados to bring out “that”. Vados produces a strange container, which opens up to reveal… several purple eggs. These are boiled eggs from the newly discovered Don-Don Bird, tasty enough to render one speechless (Vados adds that they’re pretty nutritious too). Champa invites everyone, even Goku and Vegeta, to try an egg, confident that they will blow everyone’s socks off. However, Vegeta finds it to taste no different than an ordinary egg, and Beerus calmly orders Whis to bring a food of their own: instant ramen. Champa samples a cup, and while he tries to deny it, he clearly finds it incredible. He demands to know where Beerus got this food, and Beerus brags that it comes from Earth, where there are countless tasty foods just like this.

Champa reasons that Universe 6 must contain its own version of Earth, and orders Vados to find it. Goku and Vegeta are curious about these repeated mentions of “Universe 6”, so Whis explains that there are twelve universes in total: they live in Universe 7, while Champa comes from Universe 6. These two universes are practically identical, like a pair of twins. All the universes are paired up like this: Universe 1 and Universe 12, Universe 2 and Universe 11, etc… basically if the numbers add up to thirteen, then they are twins. Goku has trouble taking this all in, but Vegeta promises to explain it later. Whis gives Vados directions to locate Earth, calling her his “big sister” in the process. Goku points this out to Vegeta, who notes that the way Vados carries herself leaves no openings for attack, so she might be as skilled as Whis. Goku tells Vegeta that there seem to be tons of people stronger than the two of them, but Vegeta notices that this just seems to make Goku happy.

Vados eventually locates the Earth of Universe 6, out on the fringes of one of the galaxies, the third planet in its solar system. She projects an image of it with her staff… but it does not look much like the Earth Goku knows, instead being a blasted rock seemingly devoid of oceans or life. Vados looks into the past and determines that the Earthlings of Universe 6 long ago wiped themselves out in an idiotic war. Beerus gloats that this means only his universe contains Earthlings capable of making such tasty food. Goku recalls that even in their universe, the Earth has often come close to being wiped out… even Vegeta tried to do it once. Vegeta tells him not to bring up old things. Annoyed, Champa proposes a battle, and if he wins then he and Beerus will swap Earths. Beerus laughs at the idea of him and Champa fighting, but Champa tells him to stop and listen to everything he has to say. Before he can go on though, Beerus makes fun of his flabby body, so Champa retorts by insulting Beerus’ scrawniness.

Now both thoroughly angry, Beerus and Champa begin punching each other at close range. A small circle of destruction slowly spreads out around them, but before this gets too far, Whis and Vados intercede to stop the fight, pointing out that a battle between the two Gods of Destruction would mean the destruction of both their universes. Beerus protests that Champa is the one who suggested they fight, but Champa complains that he did not let him finish. He was not thinking of him and Beerus fighting, but instead of holding a team battle between select warriors from their respective universes. They each pick out a team of five people, and start off with someone from one team fighting someone from the other team. Once a contestant is defeated, the next one comes out to fight, until the final member of a team goes down, thus determining which universe is victorious.

Beerus is not keen on this idea though. After all, what is in it for him? And how are they supposed to switch their Earths, anyway? It is impossible! But Champa says it is possible, if they use the “Wish Orbs” he has been collecting. Vados seems to not want Champa to mention these, but Champa tells her to keep quiet, and goes on, saying that these orbs can grant any wish, so naturally they could switch the two Earths. He has six right now, which he will hand over to Beerus if Universe 7 wins this team battle. Goku thinks that these “Wish Orbs” sound like Dragon Balls, and Beerus says that he has those in his universe as well. Champa explains that the Dragon Balls were created by the Namekians (both in Universe 6 and 7) long ago simply by shaving down fragments of the Wish Orbs, and so the wishes they can grant are limited. The genuine Wish Orbs however are planet-sized and have no such limitations. In Universe 7 terms, one could even call them “Super Dragon Balls”. But Beerus still is not impressed, since the orbs are useless unless you have all seven. Goku chips in, saying that Bulma should be able to build a radar to track the last one down. Goku is thrilled at the prospect of fighting against strong guys from another universe. Vegeta is interested too, thinking that while training is important, the tension of real battles is needed in order to truly perfect one’s techniques.

With that, it seems that the tournament is on. While Whis and Vados do not seem particularly thrilled with this development, Goku looks happy as a clam.