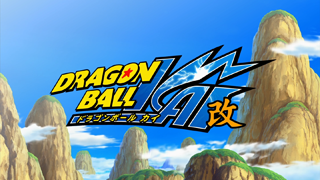 In early 2009, Toei Animation officially announced (in Weekly Shōnen Jump issue #11) that a “refreshed” version of the Dragon Ball Z TV series, re-titled Dragon Ball Kai (改; Kai meaning “renewed” or “revised”), was being produced for a high-definition presentation in honor of its 20th anniversary. The first episode of Kai aired on 05 April 2009 (Toriyama’s birthday) as part of Fuji TV’s new hour-long Sunday morning anime block, “Dream 9”. The block began with Kai at 9:00AM (hence the “9” in the block’s name), and was followed by Toei Animation’s other mega-hit anime series, One Piece, at 9:30AM.

The series featured re-recorded dialogue, new music, updated sound effects, and new digital effects, but the majority of the footage was recycled from Dragon Ball Z. Toei Animation’s announcement stressed that the series would have a higher “sense of excitement”, indicating that the majority, if not all, of the “filler” material would be cut. This indeed turned out to be the case, as a pre-title card shown before the first 13 episodes stated that Kai was the “Akira Toriyama Original Cut Version”. This meant the series would follow the manga much more closely than Dragon Ball Z had originally, and would consequently shorten the series from its original episode count.

Soon after the initial airing, it was announced that Dragon Ball Kai would have both standard-definition DVD and high-definition Blu-ray releases. This was the first time that any Dragon Ball property would be released in a high-definition format, truly bringing Dragon Ball into the digital age. Although the series was being broadcast in widescreen, due to Japan’s new broadcasting standards in an effort to transition from analogue to digital broadcasting, it had been digitally remastered in its original fullscreen aspect ratio. All of the high-definition Blu-ray releases featured to this original fullscreen format, as opposed to the DVD releases which featured the widescreen format used for the series broadcast.

Although the series was consistently seeing high rating shares, it was ultimately canceled in March 2011 following the conclusion of the Cell arc presumably due to financial reasons and replaced with Toriko. Shortly before the series ended, Toei Animation acknowledged issues of musical infringement in the series’ background music and promptly removed Kenji Yamamoto’s score, replacing it with Shunsuke Kikuchi’s original score from Dragon Ball Z. The last two aired episodes (96 & 97) of the series were broadcast exclusively with Shunsuke’s score, as well as all subsequent re-airings of the series. Due to the horrific earthquake that struck Japan on 11 March 2011, the series broadcast was delayed one week and consequently the final episode of the series was not aired as originally scheduled.

In November 2012, it was let slip that the Majin Boo arc of the series was indeed in production, although with one slight difference — it was being produced for international distribution only. However, with the waning performance of Toriko becoming quite pronounced, speculation began that Kai would be revived to replace its replacement. In February 2014, V-Jump announced that indeed “a new era of Kai” would be returning to Fuji TV in Japan and reclaiming its original time slot from Toriko. The series picked back up where it had left off three years prior, with the Majin Boo arc, on 06 April 2014.

Select the page link under a given episode number to to view its respective individual page, which will include screen shots from the original episode, an episode summary, next episode information, complete opening and ending credits, and more.