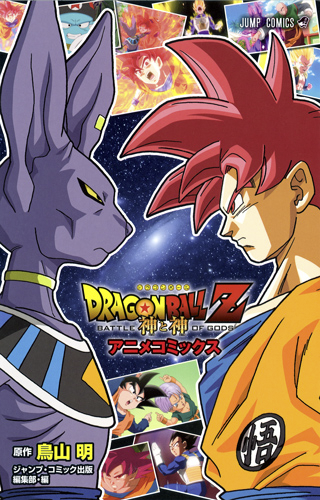 With the first movie in about 17 years, Akira Toriyama-sensei was deeply involved in the production; we reveal his behind-the-scenes stories!

About the movie’s production
What are your thoughts on having participated in the movie’s production?
With animation, up to now, I had no free time and not much interest in it. But having tried getting just a little bit involved for the first time, I felt that it might be quite an attractive realm, with many aspects that can’t be fully expressed in comics. However, after getting properly involved, I understood how tough it is, and I also felt that it’s probably not meant for someone like me, who prefers working all by his lonesome. After all, I’m a rank amateur in the world of animation. Also, I wasn’t really able to judge the time with regards to the contents. I had thought that I’d come up with something that had some leeway, but in the end, it seems that it went quite a bit over the [running] time, so it was cut down by a lot. It’s hard. By the way, don’t you think the Dragon Ball anime uses bold colors more than is really necessary? That might just be a way of doing things that’s unique to animation, but personally, I prefer limiting the use of those bold colors to certain points.
With what stance did you approach your work?
To be honest, I was busy as it was with just my own job1, so I didn’t intend to get involved with the animation. The rough script I read in order to check it over had an interesting-sounding theme of a God of Destruction, but the contents were a little dark, so while I was in the midst of giving advice on how to improve it, I got carried away and ended up writing almost everything. For the character designs, as well, I had an image of them to a certain extent while I was thinking up the contents [of the movie], so I decided that it would be faster to just draw them myself rather than asking for this or that.

When you heard “God of Destruction”, what ideas did you suggest, Toriyama-sensei?
The God of Destruction I [initially] received was a malevolent, dark character. For a twisted guy like me, I took the stereotypical image you’d think of from the name “God of Destruction”, then went ahead and reversed everything, leaving only his fearsomeness. My style is to first tear down the image, then think up the contents. Also, there was a request to have the whole cast appear since it was the first animation in a while, so that’s how the contents came about.
Did you make any requests for the direction of Beerus’ battle?
I did generally write in a rough idea of their exchanges, but apart from that, I left the battle scenes up to the people on the anime staff. They’ve been doing Dragon Ball for a long time, and I believed that leaving the animation up to talented professionals would result in something much better than thinking it up for myself. And it was just the kind of quality I expected.
Why did you create an enemy character who “isn’t completely evil”?
There would be no sense of freshness if it were just a strong enemy making his appearance, so I thought I’d make a change in that pattern. Dragon Ball, or rather, Goku’s basic rule isn’t defeating an enemy, but “winning”, so he doesn’t mind whether it’s a good guy or a bad guy.
What is your favorite scene with Beerus?
I pictured him as a cat, so I love the scene of him waking up. I used the family cat as his [design] motif. His ears are big, so it seems there are a lot of people who thought he was a rabbit, but it’s because our cat is a big-eared breed2. Incidentally, even when my daughter shows a picture of our cat to her friends, not once has it ever been called “cute”.
What is the [design] motif of Beerus’ planet?
I had a somewhat Egyptian image for Beerus, so I guess the Pyramids. It is pyramidal.

What was your concept for [Super Saiyan] God’s appearance?
I was resistant to [the idea of] Goku getting more and more macho, or having a flashy transformation, so I wanted to make a course-correction. Except, visually-speaking, a Goku who doesn’t have any change at all would be difficult to understand, so I changed just his hair color and his eyes.
Why did you go with the concept of “6 Saiyans”?
To be perfectly frank, as a story concept, it was just a convenient number for the author.
Compared to Beerus, God of Destruction, how strong is [Super Saiyan] God?
I suppose if Beerus’ strength is a 10, [Super Saiyan] God would be right about 6. Only, Saiyans rapidly increase in strength as they fight against strong opponents, so the longer they fought, the more that gap would shrink, and it might even be possible for them to eventually turn the tables. Incidentally, I guess Whis would be about a 15.
Why did you decide on a conclusion where [Super Saiyan] God Goku loses to Beerus?
Story-wise, that development seemed like a gamble, but it was out of respect for the character of Beerus, God of Destruction. I wanted to have a development where, by his being unable to win, you could get a sense of a further future for Goku and the other Saiyans.
Will Goku be able to transform into [Super Saiyan] God in the future?
I think you’ll understand if you watch [the movie], but Goku has already absorbed [Super Saiyan] God’s power and made it his own, so there is no need for him to transform into [Super Saiyan] God. Goku basically only thinks of fighting as a sporting match, so borrowing the power of five people isn’t fair, and he resisted doing that; however, it seems his curiosity towards the realm that lay even further beyond him won out.
Is it possible that other Saiyans will be able to become [Super Saiyan] God in the future?
Of course. However, strength will vary depending on the battle power of the Saiyan who becomes [Super Saiyan] God.

The Future of Dragon Ball

What about future developments in Dragon Ball?
To be honest, I haven’t given it any thought at all.
If there’s another movie, would you want to be involved?
I don’t think I’d want to be actively involved, but if I get a request and I have the time, I suppose I might.
What is the work Dragon Ball to you, Toriyama-sensei?
It’s my foundational manga. Thanks to this work being loved for so long, I’ve been able to pick and choose my other jobs to a certain extent.
Finally, a message for the readers, if you please.
In this work [i.e., the movie], gags are scattered throughout, and even in the powerful battle scenes, the content has been made so you can have good fun watching all the way to the finish. Please receive power from the characters and cheer up! Lastly, compared to the wonderfully active role all the staff members and voice actors played, what I did was insignificant. I am sincerely and utterly grateful. It’s too bad you can’t hear the voice actors in action in the anime comic!
The following translator notes are included for the benefit of the reader as supplemental information.
1 Toriyama is possibly referring to Jaco the Galactic Patrolman, an eleven-chapter manga series — which ultimately becomes a Dragon Ball prequel — that was originally supposed to debut around the same time as Battle of Gods in theaters, but ended up being released later in the year.
2 The image caption here explains about Toriyama’s cat being a Cornish Rex.
English Translation: SaiyaJedi
« Previous Page
Translations Archive