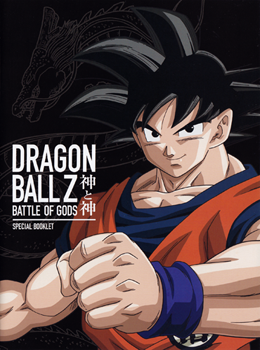 An original comment delivered on the occasion of [Battle of Gods’] release on DVD & Blu-ray!!

A MESSAGE FROM
AKIRA TORIYAMA
This was the first time that I participated in creating the story for a theatrical Dragon Ball anime. But that isn’t to say that I was requested to participate; rather, while I thought the concepts in the story I received were good, the contents were a bit dark, and in the midst of making partial changes, I got carried away, and ended up making it into an almost completely different story. That’s the correct way to put it. Since the creator was the one making the changes, I suppose I may have caused a lot of trouble for the production side of things. For the scriptwriter in particular, it can’t have been pleasant.

However, since it’s the first Dragon Ball animation in a long time, I also intended to get people acquainted with it, not just through fighting, but by enjoying this silly, lively world to the fullest. Plus, things like getting involved with the world of a God of Destruction, Vegeta’s breakdown, and Goku not being victorious were all episodes that would be very difficult to touch upon if it weren’t the creator doing it.

The last part in particular, where the main character Goku is unable to win, was a bit of a dangerous gamble going by existing theory. By doing that, however, I was able to preserve the dignity of Beerus, rumored to be the strongest there is. With respect to Goku, as well, I incorporated a message that, by having a future goal to shoot for, Dragon Ball will not end.

For the battle scenes, I wrote the rough idea of their exchanges, and left the rest up to the animation pros. Thanks to them, they made them into powerful fight scenes that I wouldn’t have been able to conceive of on my own. This sort of thing is the fruit of the various techniques employed by professionals that you can find only in animation.

The main character Goku is a strong, pure, good person, but he’s also a battle-obsessed, hopeless case of a human being, who has some issues as a father. Yet for some reason, he possesses a mysterious, lighthearted charm that keeps his circle of friends growing and growing.

If you could please enjoy that Dragon World without thinking about anything, I’ll be happy.