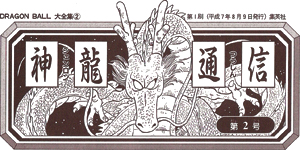 The second part of the round table discussion with the assembled past editors. This time Toriyama-sensei, who had unexpectedly come to Tokyo, jumped in on the discussion.

Akira Toriyama — Born on 05 April 1955, in Aichi Prefecture. He made his professional debut in 1978 with “Wonder Island” (WJ No.52). As you already know, he’s the author of Dragon Ball. With Dragon Ball’s ten-year serialization over, it seems he is now leisurely formulating ideas for his next work.

Kazuhiko Torishima (initial editor) — He was the editor continuing from “Dr. Slump” until the 23rd Tenka’ichi Budōkai in “Dragon Ball”. It seems that he was the individual who served as the model for Demon King Piccolo.

Yū Kondō (second editor) — Coming from a shōjo magazine to Jump, he became editor of “Dragon Ball” right off the bat. He was editor from the Saiyan arc to right before perfect-form Cell appeared. He is the model for Freeza.

Fuyuto Takeda (third editor) — He was editor from the appearance of perfect-form Cell, through the Majin Boo arc, to the final chapter. He is the individual who become the model for the original Majin Boo. It’s rumored that he’s incredibly skilled at karaoke.

Torishima: While we were thinking of what to do for the next serialized work after Dr. Slump ended, Toriyama drew various one-shots for Weekly Jump and Monthly Fresh Jump.

Toriyama: I certainly did draw a lot of them. I had, who knows how many, painstaking meetings with Torishima-san.

Toriyama: Even though we had all these painstaking meetings. (laughs)

Torishima: Then after Dr. Slump ended, there was a good response to Dragon Boy, which had been drawn without too many meetings beforehand.

Toriyama: With that nice response, I felt “Ah, there’s this track, this just might work out.” And this time I had wanted a boy as the protagonist.

Takeda: And then serialization began, but from the beginning, how much of the story had you already planned?

Toriyama: I hadn’t thought it up at all. I figured it would probably end in about a year, and I had only really prepared storyboards for three chapters.

Torishima: That’s right. Usually you prepare more. But with Toriyama-sensei, the rough-draft is the storyboard.

Kondō: Normally, in addition to a rough-draft, there’s a storyboard with the panel layout drawn in rough lines, to help you come up with the rough-draft quickly. That’s why it’s a good thing to have, whether or not you make corrections. (laughs) But Toriyama-sensei is a genius at correction. By just correcting one panel, the impression of the whole thing suddenly changes.

Toriyama: No, it’s just that correcting things is tiresome, so I get by with doing the minimum amount of correction. (laughs)

Torishima: This is changing the subject, but the thing I felt was the biggest crisis for serialization was when he told me that Goku would grow up. Toriyama-sensei threatened that if Goku didn’t grow up, then he couldn’t continue with serialization. (laughs) It was terrible, breaching the subject like that. “You can have the protagonist grow up, just don’t scare me like that,” I said.

Takeda: So you made the necessarily arrangements.

Torishima: But it was against the theory of manga. The impression each character leaves is the basis of their appeal. I was very nervous, so on the release day I went to the editing department before 8:00 and waited. “Won’t there be phone calls of complaint from the readers?” I thought. (laughs) But there weren’t any at all. It seems that the readers accepted it.

Takeda: Originally the readers accepted Goku as cute, but that changed to them accepting him as cool.

Torishima: Goku grew up, and then during Kondō-san‘s time, Vegeta appeared and the number of female fans increased. (laughs)

Kondō: It’s because before I came to Jump, I worked at a shōjo manga magazine. (laughs) After I became editor, we decided what direction things should advance in. In a story manga the fights have to escalate, that’s all it was. I don’t think there was anything extra.

Takeda: That period was when Sensei began to try and make Dragon Ball more popular through its story line, and it certainly bore fruit.

Toriyama: At that time it began to be more fun to think up the story than to draw the pictures. But with the story, I basically only thought of each chapter. That’s why I end up getting caught in these quagmires. (laughs) Around the time of Trunks’ time travel, it was dreadful. I kept drawing, and it just got more and more incoherent.

Torishima: You couldn’t have done that if Kondō-san wasn’t your editor. I can’t stand that kind of troublesome stuff. (laughs)

Toriyama: You’re terrible to say that, Torishima-san. Right around then was when Artificial Humans No. 19 and No. 20 appeared. You weren’t my editor or anything anymore, but you specifically called me to say, “I thought that the enemies had finally come, but aren’t these just a geezer and a fatso?” (laughs) In truth, I hadn’t had plans for anyone but No. 19 and No. 20 to appear. But there was no helping it, so I brought out No. 17 and No. 18. Then you called me up and said “What, this time it’s just some brats?” So I brought out Cell. (laughs)

Takeda: So you hadn’t planned on Cell appearing at all?

Takeda: The bug-like one?

Toriyama:
Yeah, but Kondō-san said, “He looks ugly. Of course, he can transform”, so I had no choice but to transform him into his second-form.

Kondō: Was that how it was?

Toriyama: And then you were really awful, Kondō-san. “This time, doesn’t he look like a moron? Hurry up and make him into his perfect-form” you said.

Kondō: But he really did look like a moron. (laughs)

Toriyama: With second-form Cell as well, I liked him well enough. Actually, I had wanted him to play a more active role. But since I was told he looked stupid, I had no choice but to change him. (laughs) So I made him into his cool-looking perfect-form, which was to Kondō-san‘s liking.

Panel 1
Lately I’ve finally been able to relax a little bit. So I always clean out the pen four our pet bunnies and make it look pretty.
Panel 2
On Sunday I play with the kids.
Panel 3
I can totter around on my bicycle or motorcycle.
Panel 4
I even get up early. Well, when I say that I mean around 2:00 in the afternoon…
Panel 5
Incidentally, I really like to go to the super market or department store and check out what kind of things they have.
Panel 6
When I’m out and about, it’s rare for me to be recognized. But for some reason every now and then someone will know who I am. It might be because my picture occasionally appeared in Weekly Jump.
Panel 7
I’m just a manga artist, so I can’t stand being scrutinized. I just want to loiter around. So now I seldom go to places where I might be discovered.
Panel 8
This means that I don’t go for mass communication or lectures. I’ve always hated those anyway. Well, now I have got a face that can’t go out in public.
Panel 9
They wanted some photos of me for these complete works, so I let them have some, but only pictures where you can’t tell too well who it is. Sorry. I think this way I won’t have to put up with even more of this!

This is a corner where celebrities with an exceeding love of Dragon Ball appear! For the second round, we have comments by the extremely popular Shingo Katori, who is successful in drama singing and variety!

I was raised reading Dragon Ball!!
I read Dragon Ball right away when it began serialization. I was a lot like Goku as an elementary school student, since I lived way out in the mountains. Out of all the characters who appeared in Dragon Ball, my favorite would have to be Piccolo, because he’s cool. If I were to compare the members of SMAP to Dragon Ball characters… Kimura-kun would have to be Vegeta. Nakai-kun would be Goku, since he’s bright and carefree just like him. I guess Mori-kun would be Tenshinhan. Gorō-chan would be Piccolo. Kusanaki-kun would be either Kuririn or Yajirobe. I’d be Gohan. I grew up reading Dragon Ball, through elementary school, middle school, and high school. Dragon Ball is the manga of our generation!! I was a little bit sad when it ended serialization, but I’m extremely grateful to Toriyama-sensei!
English Translation: Herms
« Previous Page
Translations Archive