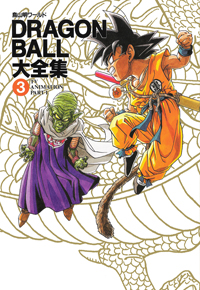 3rd Round — A Fusion with Animation

When talking about Dragon Ball, one mustn’t leave out the animated television adaptation. It expanded the fanbase, and fans even now continue to voice their support. The original creator, Akira Toriyama, speaks in his own words about the TV anime that he helped build!!

* Anime-related discussion will continue in Daizenshuu 5.
(5 June 1995 at Toriyama-sensei‘s home)

1Theatrical animation, released in 1985. Based on the novel of the same name by Kenji Miyazawa. All characters in this animated version are depicted as cats.

2TV animation, aired 1963–66. Based on the comic by Osamu Tezuka. The first animated television serial in Japan.

4Theatrical animation, released in Japan in 1962. A Walt Disney classic. The main characters are a dalmatian named Pongo and his 15 puppies. A masterpiece of animal animation.

5TV animation, aired 1966–67. Based on the comic by Fujio Akatsuka. A screwball comedy anime driven by the antics of sextuplet brothers.

6TV animation, aired 1963–64. Based on the comic by Jirō Kuwata and Kazumasa Hirai. A science-fiction action anime. 8-Man does battle with countless villains for the sake of peace.

The following translator notes are included for the benefit of the reader as supplemental information and were not originally published in the daizenshuu.
T1Toyo’o Ashida was an animator, who first worked on Toriyama’s material as an Animation Supervisor on Dr. Slump — Arale-chan. The two later collaborated in 1988 on the original anime Kosuke-sama Rikimaru-sama: The Dragon of Konpei Island for Jump‘s 20th Anniversary “Jump Anime Carnival” event, which is where Toriyama is said to have got his inspiration for anime-style shading in his comic.

T2The character Iyami’s spastic “She—i!” pose became something of a fad in Japan in the mid-1960s. Even John Lennon did it.