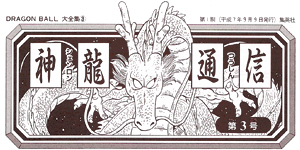 Kenji Shimizu (Producer, Fuji TV) — A producer at Fuji TV, he has overseen Jump anime such as Dragon Ball, Z, and Captain Tsubasa J, along with major hits such as Chibi Maruko-chan.

Kōzō Morishita (Producer, Toei Animation) — A producer at Toei Animation, he has overseen a large number of animated Toriyama works such as the new Dr. Slump theatrical series, in addition to Dragon Ball and Z.

Shunsuke Kikuchi (Music) — He has composed the background music for many works, both live-action and animated. Beginning with Dr. Slump and continuing with Dragon Ball and Z, he has been involved with Toriyama works for many years.

Takao Koyama (Series Organizer / Scenario) — Representative of [writing collective] “Brother Noppo”. For animated Toriyama-works, he has participated in scriptwriting since the time of Dr. Slump. From Z onwards, he has also been in charge of series organization.

Shigeyasu Yamauchi (Director) — In the TV series, he has been an episode director since Z episode 45. For theatrical works, he has had a directorial or supervisory role since Spring ’93’s “Burn Up!! A Red-Hot, Raging, Super-Fierce Fight”.

Masako Nozawa (Voice of Goku, Gohan, & Goten) — Affiliated with 81 Produce. As you know, she does the voice of Son Goku. She manages the duties of the three men in the Son family — Goku, Gohan, and Goten — by herself. She possesses a dynamic voice.

Tadayoshi Yamamuro (Animation Supervisor) — He has handled key frames since Dragon Ball episode 7. From Z onward, and in theatrical works starting with Spring ’93’s “Burn Up!! A Red-Hot, Raging, Super-Fierce Fight”, he has also served as an animation supervisor.

Thank you all very much for coming together despite your busy schedules. So without further ado, it’s been 12 years this year since Dragon Ball started airing in February ’86. What do you think is the staying power that has allowed it to maintain its high level of popularity over such a long time?
Morishita: It’s definitely the power of the original work; first and foremost, the appeal of Toriyama’s world is amazing. Even in characters other than Goku, a sense of immediacy, or of the everyday, is there.
Certainly, there was no other work where the characters grew up so much before one’s very eyes, even having children and grandchildren.
Morishita: I believe they have such power that, if Sensei were to to draw many works at once, each one of them could be a star.

Koyama: In terms of the story side of things, for Dragon Ball, the amount of time until a chapter appearing in the serialization aired on TV was incredibly short. That’s because we would get to work on the script at the point where Toriyama-sensei had decided on the story, and started drawing the draft. I think that kind of immediacy was something that allowed the people watching to get into it easily.

There are quite a few original parts in there, as well.
Koyama: There are definitely parts where we caught up to the original work, and there was no way we would get ahead of it, so naturally, original material went in. In extreme cases, we’d even make the entire A-part (the first half of an episode) from a single panel of the manga. (laughs) However, I think the young writers at “Brother Noppo” really honed their skills with that. I’m extremely thankful for this work in the sense of it being a training ground, as well. To be honest, we’ve had questions come in about those original parts, asking where they are in the comics. In that way, I think the way the TV-original bits mixed well with the original comic is part of the appeal of the Dragon Ball anime.
I think that the fans’ reactions are communicated most directly where you are, Nozawa-san. What is Dragon Ball‘s appeal to its fans?
Nozawa: Goku, when he was little, was like your friend or your little brother. Then after he grew up, something like an older brother… yes, like he’s close to you, and if something were to happen, he would step in to help you. The amount of letters expressing that sort of sentiment is just overwhelming. So, it was rough when Goku got married. We just got so many letters.
What sort of reactions were there?
Nozawa: They said, “I wanted to die”. (laughs) Also, “No!” or “Why?” (laughs) But I think what put them at ease when they saw it on TV was how he doesn’t really live like he’s married. There’s nothing like them being a domestic couple, so everyone was relieved. Really — how should I put this? — he’s his own man, as a love-interest, older brother, or father, isn’t he?

Koyama: You know, I like Goku’s line, “Well, whatever”. No matter the situation, he accepts it with “well, whatever”, then thinks about what he should do from there. That sort of freedom, where he doesn’t get fixated on something from the start, takes whatever there is, and comes out from there — I really like that. I have a feeling that the fans are probably saved by that, as well. Just as they’re feeling cornered by a variety of things, such as cram school or whatever else, Goku accepts everything with a, “Well, whatever”; I like that sort of strength.

Yamamuro: It’s because Goku has a forthright personality. Regardless of carrying something incredibly heavy on his back, he’ll just handle it lightly. Ultimately, it’s like he’s enjoying doing it. Maybe that’s the reason why they accept it.

Nozawa: I say it, too. Things like, “Oh well; I’ll get through it,” or “Well, whatever; I’ll manage. It’s not gonna kill me,” are my favorite phrases. I mean, Gohan has his training, right? Goku or Gohan, they both do some incredible training, and yet it doesn’t feel like it’s too tough for them. After the training, the people watching breathe a sigh of relief, don’t they? I think things like that are also a lifesaver.

Yamauchi: In the special (“Defiance in the Face of Despair!! The Remaining Super-Warriors: Gohan and Trunks”), there are lines where Bulma is describing Goku. She tells Trunks that he may not be outrageously strong, but he’s a person who gives you the sense that he’d do something about the situation for you, one way or another. If Goku were stupendously strong, the story wouldn’t go anywhere. As soon as Goku came out, it would be over. That’s why, in all of the stories, it first makes you wonder whether it will really be OK even if Goku shows up, then he does something about it. It depends on age too, of course, but I think the reason why he’s accepted by such a broad demographic lies in that.

Shimizu: It goes without saying, but Dragon Ball‘s appeal is that the characters and story are wonderful. I think it’s the only type of software in Japan that would pass in Hollywood the same way as things like Indiana Jones. There is something of a gap in the characterization, but the fact that it’s accepted the world over is a testament to how good this work is. Regardless of what people might say, I think that alone is probably enough. Also, it’s not merely a hero-story. There are definitely good and evil, and Goku is incredibly strong, but I think the fact that he isn’t simply strong is what lends depth to the work. In the way he wins, as well, while building up such an absolute evil, in the end, that absolute evil comes to an amicable settlement. Strangely enough. Well, there are also ones who end up diced up and killed like Freeza, though. (laughs) Generally, in this world known as Dragon Ball, whatever evil there is, it is contained and forgiven. Whatever sort of person opposes him, Goku forgives them, as though everything comes together again in the end. That aspect is what keeps Dragon Ball from being simply a hero story. I believe that, without saying anything difficult, and while putting forward a face of simply being entertaining, it probably has that sort of worldview. I think Toriyama-sensei would probably deny it, though. “I’ve made something that’s simply entertaining,” he’d say. (laughs)

Panel 1
What I’m up to nowadays is what it’s called, but lately, I’ve been intensely contemplating the plan I’ve aaalways had of remaking my workplace over again, so I’ve done almost nothing apart from that.

Hmm… I’ve been putting a lot more effort into it than my actual work.

Panel 2
Speaking of activities a bit different from the norm, I went to Tokyo to visit the home of my number-one comrade-in-arms among manga artists, Masakazu Katsura (that jerk)…

Panel 3
From there, he and I went on to visit the home of the illustrator, Katsuya Terada (that jerk)…

His illustrations are really good~~

Panel 4
For the big finish, all three of us went to visit the home of our biggest objective this outing, the genius sculptor Takayuki Takeya-kun. (The reason he’s “-kun” and not “that jerk” is because this day was the first time we’d met.)

I had already thought that Takeya-kun‘s works were amazing, but when I saw them, they were unbelievably amazing!

I, too, had a little bit of confidence in things like models, but his works were in a different dimension. Just as you’d expect from a pro!

Panel 5
I’ve written about this before, but I’m not a people person, so I rarely ever take the initiative to meet up with someone, but meeting up with these three young geniuses isn’t bad. Each of them possesses their own unique artistic sense, so it’s stimulating for me, too.
Panel 6
… So, I’ve written this far…

But, just as I thought, what I’d feared has come to pass…

Panel 7
I DON’T HAVE ANYTHING ELSE WORTH WRITING ABOUT!!

THAT’S WHY I SAID I DIDN’T WANT TO DO THIS!!

Panel 8
Starting next time, if I can’t come up with any material, I think I’ll just go ahead and write about something unrelated.

In this column, we introduce prominent figures in various fields and have them tell of their love for Dragon Ball. For this third round, the extraordinarily bright super-fighter Masa’aki Satake-san makes his appearance!!

I started reading Jump in elementary school, so I’ve read Dragon Ball all the way from the beginning, too. Things like the Tenka’ichi Budōkai are like mixed martial-arts matches, so I enjoy them. With regards to Goku as a character, he always fights with mushin2. So, as a result, he ends up absorbing a lot of things, doesn’t he? He returns to mushin when he fights, and so he’s strong. I think Goku is, in a sense, the ideal competitor. There were a lot of fights in Dragon Ball, but I believe that spirit of, “at the end, you shake hands,” that runs through it all, is of great importance. Everyone, including me, carries a variety of conflicts with them, but I really do want to shake hands at the end of it.
The following translator notes are included for the benefit of the reader as supplemental information.
1 The series Katsura was working on at the time.

2 A type of coordinated mental state that martial artists are said to enter during combat, absent of extraneous thought and movement.