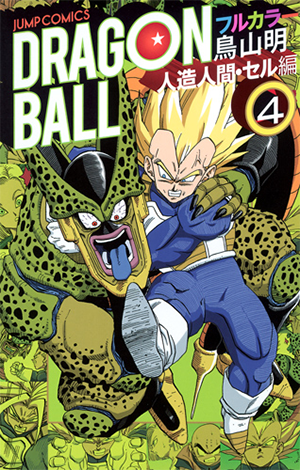 Explaining in detail about scenes and characters from the “Artificial Humans & Cell Arc” that are on your mind
Q1: What’s the source for Cell’s name?
It’s because “cell” in English is “cell”!1
Since he absorbs humans and transforms, he was named after the English word for “cell”!
Q2: What served as the model for Cell’s design?
Insects!
Besides his design, the way in which he hatches from an egg and sheds his skin as he grows was also based on insects.

“Artificial Humans & Cell Arc”: Inside Scoop
Drawing Cell’s design is hard!
Picture-wise, the spots on his body were really tough; it was very tedious to draw them every time!
Q3: Whose cells is Cell’s personality based on?
It’s an original personality with various other characters’ personalities added in.
Cell’s basic design was thought up by Gero as the ultimate artificial human, while Gero was in a good mood due to successfully completing No. 19. The computer redesigned the weak parts of the original personality, adding in the personalities of various different characters to make him the perfect weapon.
Q4: What’s Akira Toriyama-sensei’s favorite artificial human?
Second-Form Cell!
That beefy guy. When I showed it to my editor at the time2 and said this is what I had settled on, he said “Hey, this guy looks stupid. Hurry up and make him into his perfect form”. I had actually planned on having him play a more active role.