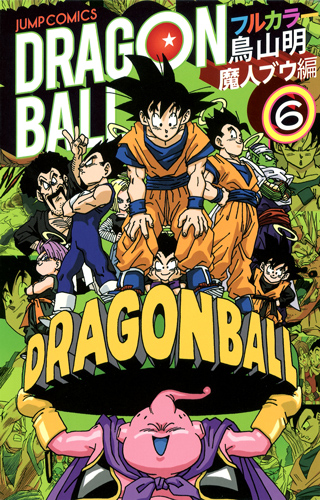 In commemoration of the completion of the Full Color Comic “Majin Boo Arc”!

Revealing these last-but-not-least inside scoops!
The Truth is!
Toriyama: It was fun drawing Gotenks and Majin Boo’s fight.
Frankly, I like these stupid, silly battles a whole lot more than the serious ones. I guess I really am a gag manga artist first and foremost (laugh).

Legend has it that the editor at the time would crack up laughing inside the editing department when he saw the rough boards for the Gotenks/Majin Boo battle!

The Truth Is!
Toriyama: No.17 during the Genki-Dama scene was actually Lunch in the rough draft.
Lunch went off chasing after Tenshinhan. Since Tenshinhan and Chiaotzu moved around from place to place as they trained, they really gave her the slip.

By the way, it’s said that after the Cell arc No.17 became an outstanding park ranger at a royal nature park, and built a happy family.1

The Truth Is!
Toriyama: Satan’s wife was a beautiful singer named Miguel!
Since she was named “Miguel (archangel)”2, during their marriage a big fuss was made about how “an angel is marrying a devil!”

Even though he intended Satan to just be a one-shot character, it seems he became so fond of Satan that you could even say Satan’s his favorite.

The Truth Is!
Toriyama: No matter what sort of opponent, Goku wanted to fight them one-on-one!
There’s just one enemy, despite there being so many people over on this side. It’s a bit cowardly, isn’t it? I suppose Goku’s true desire was to fight one-on-one.

You can tell from this final line from the battle with Majin Boo that Goku’s true desire is to fight one-on-one.

Dragon Ball Worldview: Inside Scoop
The Secret Behind the Birth of the Gods
Toriyama: The Kaiō are born and raised on a planet called the “Planet of the World Core”.
The Kaiō are born as “Core People” from the fruit of the gigantic World Tree on the Planet of the World Core. The planet’s population is about 80, and their lifespans are about 75,000 years. The Core People have no gender, and live laid-back lives, studying various things at a school-like castle. When a Kaiō on one of the Kaiō planets dies, the next Kaiō is chosen from among them by lottery. However, the Kaiōshin are only chosen from Core People born from a rare, special golden fruit.

1 As it had just recently been revealed a month prior in Volume 6 of the Cell arc’s “Full Color” manga release
2 ミゲル (migeru), a reference to the Archangel Michael
English Translation: Herms
« Previous Page
Translations Archive