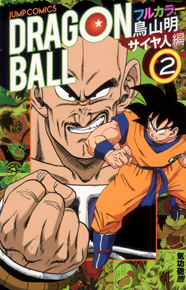 We answer seven questions for you. We’ll solve simple mysteries about the “Saiyan arc”!!
Q1: What are the Senzu that Karin-sama gave?
Mysterious beans that can heal anything!!
These beans were grown by Karin-sama, and just one gives you a full stomach!
Q2: About how high are the Saiyans’ battle powers?
Nappa is about 4,000!!
When they invaded Earth, Raditz was 1,500 and Vegeta 18,000, so there are big gaps even among members of the same race.
Q3: Who’s that old lady Kame-Sen’nin and co. talk to?
Uranai Baba!!
She’s a mystical granny able to freely traverse between the afterlife and the living world! She’s actually Kame-Sen’nin’s older sister.
Q4: What wishes have Goku and co. had granted by Shenlong?
Everything from stupid wishes to reviving the dead!!
The first one Goku and co. had granted was to get some “gal’s panties”. Afterwards they use them to bring back the dead.
Q5: Why did Tenshinhan die after using that technique?
The “Kikōhō” is a technique that puts your life on the line!!
The secret technique of the Tsuru-sen School, it concentrates a kiai into a single point and fires it. Because it uses up a large amount of ki, it also endangers one’s own life.
Q6: How high of a battle power can scouters measure?
In response to evolving “strength”, their capacity increases too!!
Old model scouters were incapable of measuring battle powers of over 22,000. But new models of scouters are always in development to go along with battle power inflation.

Q7: Are the interiors of Saiyan spaceships comfortable?
They’re cramped, but easy on the body.
These spaceships are purely for transportation purposes, carrying along unconscious people. Because of this they are not outfitted with any particularly comfortable features, but are made not to cause any strain on the body.
English Translation: Herms
« Previous Page
Translations Archive