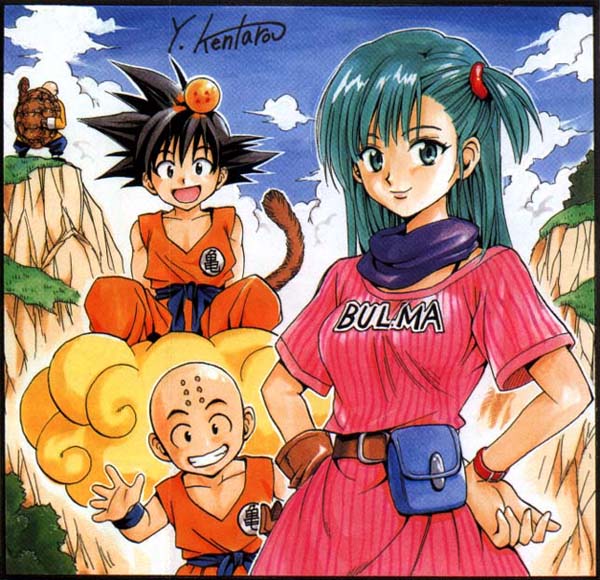 “Do you remember me?”
“Of course I remember you! You’re Vegeta-Yabuki!!”

That was a conversation in my third year of junior high2, between me and an elementary-school friend I hadn’t heard from in a few years. During elementary school and junior high, I changed schools three times due to my parents’ work, from Okayama to Kōchi, from there to Kita-Kyūshū, and then back to Okayama. He was a friend from when I was in Kōchi, and for whatever reason, his strongest impression of me was apparently that I was good at drawing Vegeta.

Ever since I was in elementary school, if I had free time, I’d spend it doing nothing but drawing. And, the things I’d draw would always be Goku, or Vegeta, or Freeza… Characters from Dragon Ball, which I loved. Once I was able to draw characters off the top of my head to an extent, I’d then draw an original Tenka’ichi Budōkai manga, and make Goku fight against a character of my own design. And, the winner would always be Goku. Come to think of it, everything I learned about how to draw manga, from the expressive techniques, to dividing up the panels, I learned from Dragon Ball. If not for Dragon Ball, I might never have wanted to become a manga artist. More than anything, Dragon Ball taught me “the joy of drawing manga”.

Speaking of which, my debut in Jump wasn’t with my own manga, but with Dragon Ball. Around the end of my third year in junior high, there was a “Fusion Contest” promotion in Jump, where you had to create an original character by making any two characters from Dragon Ball do Fusion. I fused together my favorite characters at the time, teenage Gohan and teenage Trunks, to create a character called “Gohanks”3; I drew an illustration and sent it in. Then, I got an award called the “Cool Prize” (heh), and it ran, relatively large, in the color pages of Jump. That experience really moved me.

It’s been about eight years since then, but even now, where I work, I still have a bunch of figures of Goku and company that I collected back then on display. When I get tired from drawing my own manga, I’ll draw things like Cell and Freeza in Toriyama-style in the margins of my notebook. Doing that, I feel strangely excited, and I get more energy. Nothing has changed since elementary school. I believe I’ll keep on drawing manga.

The following translator notes are included for the benefit of the reader as supplemental information.
1Kentarō Yabuki (矢吹健太朗), born on 04 February 1980, is a manga artist best known for creating the manga series Black Cat and illustrating the manga series To LOVE-Ru.
2Equivalent to the ninth grade in the American educational system.
3Gohanks, as published in Weekly Shōnen Jump 1995, Issue #19.
English Translation: Julian
« Previous Page
Translations Archive