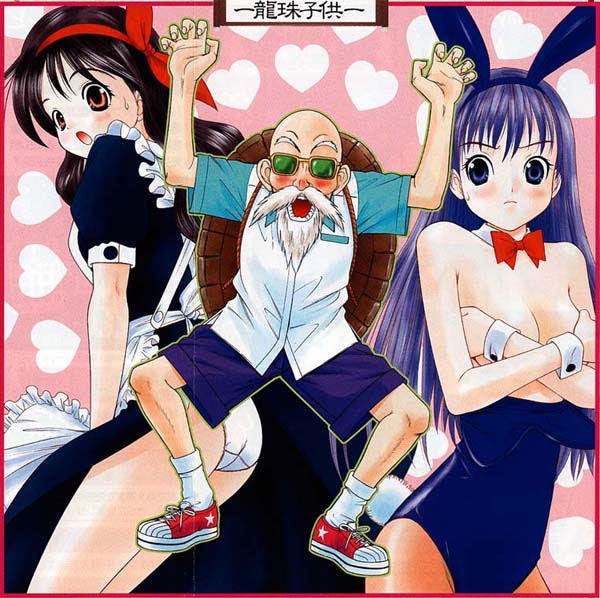 “Puff-Puff”. These words, which suddenly entered my sixth-grade brain, long vexed my heart.

Wondering what it would feel like to squeeze my face in between a pair of breasts, for starters, I buried my face in my friend’s similar-looking buttocks, and made a foul-smelling memory.

Having been raised in a relatively strict household, I was terribly ashamed of myself and my excessive interest in the opposite sex, and even wondered, “Is it all right for me to be such a pervert? What if I don’t grow up into a decent person?”

What finally set me free was Kame-Sen’nin.

Seeing him say things like “A gal’s panties” or “Let me poke your boobs” with a lascivious look on his face, even while being a great enough man to be called Muten Rōshi, be respected by all martial artists, and even blow the moon to bits, I remember feeling oddly as though I had been rescued, like, “Ah, so it’s OK to still be a lecher, even for an adult of such stature.” It’s not limited to Dragon Ball; in Dr. Slump, as well, Dr. Senbei appears, who despite being the genius scientist of the century, is a hopeless pervert and uses his intellect to those ends. He’s not just incredible; he has his faults. He has some careless flaw somewhere. I think that’s why Toriyama characters are so beloved.

I Want to See Girls

From the start of Dragon Ball’s second half onward, the female characters’ role in the story nearly disappeared. Maybe that in itself is proper for a shōnen manga, but the girls drawn by Toriyama-sensei really are quite appealing and cute, so, by all means, I’d like to see another manga where girls play an active role.