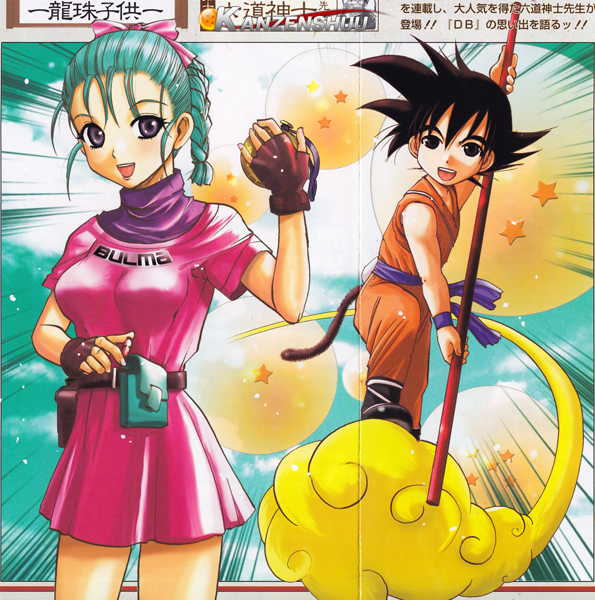 The Main Character Really Is Goku

The first thing I remember is the scene where a boy with a tail is chopping firewood with a cry of “Supopopo—!” Later on, there wouldn’t be a person in Japan who didn’t know who he was; that scene was the first appearance of the character “Son Goku”.

Dragon Ball was serialized for about 10 years, if memory serves; it began when I was in junior high, then ended when I graduated from university… around 1995, I think. It’s been eight years since then.

And yet, even when I re-read it now, it still hasn’t faded one bit!

On the contrary, re-reading from an illustrator’s perspective, I feel its tremendousness all the more.

There probably aren’t very many works where almost anyone could make a conversation out of “That character…”, including both heroes and villains. And to be able to have a conversation, no problem, with someone ten years or more older or younger than you, on top of that.

Like most people, I like the main character, Son Goku, and I got fired up at the time of the Super Saiyan development; he was [up against] Freeza, the most “evil” guy you could think of in the work up to that point, after all (the second most is Dr. Gero).

When along the way, it seemed that it would shift to Gohan being the star, I have to admit, I was a bit disappointed. But after all was said and done, Son Goku was the main character to the last, and when it concluded with him having continued to protect the world as its strongest being, while I was sorry to see it end, I shouted for joy.

The following translator notes are included for the benefit of the reader as supplemental information.
1Kōshi Rikudō (六道神士), born on 16 November 1970, is a manga artist best known for creating the manga series Excel Saga. However, as Excel Saga was published by a different company (Shōnen Gahōsha), he was probably allowed to participate because of his association with Shueisha through his series Arahabaki, which ran in Ultra Jump from 2000 to 2002.
English Translation: Julian
« Previous Page
Translations Archive