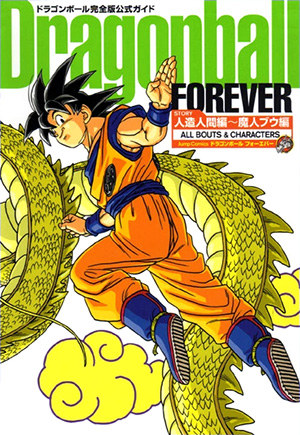 A question corner where we ask Sensei anything about Dragon Ball!! First off, we had him answer about what he’d do if he were a denizen of the Dragon Ball world!!
Q1: If you had Hoi-Poi capsules, what would you put in them?
I’d really want some. I guess it’d be good to put my entire house into one, since it’d make moving easy.
Q2: If you had Kinto’un, where would you go?
Wouldn’t I not be able to ride it? Since I’m not pure…
Q3: If you had brains on par with Bulma’s, what would you make?
A teleporter would be nice. There are lots of places I want to go, but getting there is a pain.

We asked about the inhabitants of the Dragon Ball world!! There’s heaps of valuable(?) information, such as epilogues for characters that have been on our minds!!
Q1: Were there any models for Bulma’s hairstyles?
There weren’t any models, but I consciously tried to change her hairstyle during each turning point in the story.
Q2: Did Lunch ever manage to meet up with Tenshinhan?
I wonder… Tenshinhan gave Lunch the cold shoulder, but she tenaciously persisted, and ultimately they were together! Couldn’t that be it? (laughs)
Q3: What became of Tsuru-Sen’nin and Tao Pai-pai afterwards?
Ye~ah… they got mixed up in something or other and died, but they were bad people, so perhaps they weren’t restored to life…
Q4: How strong is Mister Satan?
I think he’s plenty strong. But… I don’t get the feeling that he’s as strong as Bob Sapp1 (laughs).
Q5: Was Yamcha able to become happy?2
He’ll aaalways be like that. (laughs)
Q6: Afterwards, was Vegeta always unemployed?
Bulma is absurdly rich, so there’s no need for him to work.
Q7: Pan-chan is strong, but is Bra strong as well?
Well, I think she’s strong.

Q1: How did you think up the clothing designs?
I looked at stuff like the clothes my wife wears and fashion magazines, and I could tell what was popular by watching TV. It would be artless to draw them just as they were, so I changed them around a bit.
Q2: Which is more fun: drawing a girl’s body or her face?
The body’s the fun one. But I’m not really confident at drawing it.
Q3: Please give a few words to young people who aspire to be cartoonists.
I think it’s best to know about lots of different things besides comics. I don’t think you can become a cartoonist if you look at nothing but cartoons.
The following translator notes are included for the benefit of the reader as supplemental information.
1Bob Sapp is a professional wrestler, mixed martial-artist, and former NFL player, who appears frequently on Japanese variety/comedy programs.
2In other words, “Was he able to find happiness in love?”
English Translation: Herms & SaiyaJedi
« Previous Page
Translations Archive