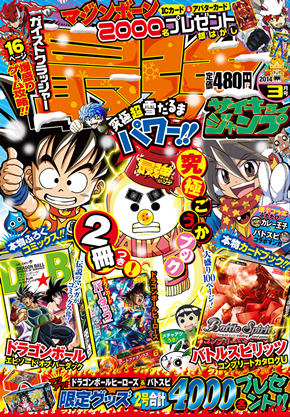 As you know, Akira Toriyama-sensei, the father of Dragon Ball, oversaw the manga in this volume, and so naturally, he answered the questions of Naho Ooishi-sensei, who is also a super-fan of Dragon Ball!! Don’t miss it!

However, I don’t remember the particulars of how it went at that time1.

As for his design, I think I probably just gave some editorial supervision to what was suggested to me by [people from] the anime side of things.

I don’t recall a lot about the exact contents of the anime, but I do remember it being quite well done. So I used that setting in the main story, as well.

The Saiyans [as a whole] appear warlike, but what sort of personality does Bardock have?
Of course, Bardock is a Saiyan, too, so he is warlike, but compared to other Saiyans, who are cold-hearted and of simple thoughts, he also happens to possess calm judgment and a small measure of humanity.

Because of his actions of “saving his companions“, which is rare for a Saiyan, he is greatly adored among a portion of the low-class warriors.

What sort of person was Bardock’s wife — in other words, Goku’s mother?
As for her appearance and such, you’ll find out if you read the bonus comic in the collected release of Jaco the Galactic Patrolman.

Her name was Gine2, and a long time ago, she fought on a four-person team together with Bardock.

Whaaa~t?!! She’s in the bonus comic?! Please tell us about Gine in more detail!
Gine had a gentle personality and wasn’t cut out as a warrior, being repeatedly saved from danger by Bardock. At that time, a special emotion was born between them. Normally, Saiyans don’t have much of a notion of romance or marriage, and apart from the royal family of Vegeta, they aren’t particular about blood-relationships.

Being in among all that, I suppose you could say that the pair of Bardock and Gine were those rare Saiyans who were joined by a bond other than for reproductive purposes.

Incidentally, Gine, who was not cut out as a warrior, would go on to work at the meat distribution center on Planet Vegeta.

Please tell us about Bardock’s family structure! Did Goku, and also Bardock himself, have any siblings? (Apart from Raditz, that is….)
The quartet of Bardock, Gine, Raditz, and Kakarrot make up Bardock’s family, such as it is, but all four of them were never together.

Also, I think that Bardock himself might have had siblings, but perhaps even Bardock himself doesn’t really know, and at any rate, he probably has no interest in it, either.

Saiyans don’t have much of a concept of “family”.

It was written that Saiyans have a long youth3, but how long is their lifespan on average?
Their [natural] lifespan in itself is longer than humans’, but since they are a warrior race, many of them die in battle, and their average lifespan isn’t all that long.
About how high was Bardock’s battle power, ultimately? (In Episode of Bardock) Also, if he hadn’t been defeated by Freeza and had continued his growth, about how strong would he have gotten?
To be honest, I haven’t thought it through that far, but Bardock is a low-class warrior. Although even saying that, almost all [Saiyans] were low-class warriors, and there were only about 10 mid-class warriors. And when you get to the elite warriors, there’s only King Vegeta and Prince Vegeta. Bardock is in the upper ranks as far as low-class warriors go, but he isn’t able to become a mid-class warrior.

This rank is determined by an innate latent battle power, but naturally, if their battle power rises greatly afterward, they can be promoted.

About how many of Freeza’s race are there? Are they quite thriving, with a big population?
Freeza is what you might call a mutated life-form. Strictly speaking, Freeza’s father is a mutant with an abnormally high battle power. And, born from his father alone4, still in strong possession of the mutant traits, was Freeza.

Accordingly, even saying “Freeza’s race”, these two are the only ones who possess an abnormal [level of] battle power and cruelty.

Since Saiyans are supposed to have no affection for family or friends, does this actually make Vegeta, who holds his family and wife dear, an even stranger (kinder) Saiyan than Goku?
Vegeta, whose pride had been deeply wounded, sought help from Bulma, and little by little, his ruthless personality changed. Nowadays, you certainly might be able to say that. On the other hand, Goku might not have a sense of family members like Gohan and Chi-Chi except as one of his companions.
In the future, might we be able to see Bardock in action…? And Vegeta as well, if possible….
You really like Bardock, don’t you, Ooishi-san?

But unfortunately, Bardock has been dead for quite some time, so you probably won’t be able to see him in action except in stories of the past. There is the trick of having Shenlong bring him back to life, but by this point, his battle power isn’t high enough, so methinks it’d be a bit difficult.

As for Vegeta, in the event that there’s talk of another animated film, then next time, I’d like him to play the main role. (Of course, this is nothing more than intentions, and I haven’t decided anything at all.)

W-… why, we’ve jumped into talk about the next movie!!!
And on top of that, next time Vegeta will take center stage!? I’ll be looking forward to this!!

Toriyama-sensei, thank you so much!

From now on, we won’t be able to take our eyes off the limitlessly expanding world of Dragon Ball!!!

The following translator notes are included for the benefit of the reader as supplemental information.
1 The process is described in detail in the roundtable discussion found in Dragon Ball Z Anime Special II, released in June 1991.
2 ギネ (gine with a hard “G” sound at the beginning and an “eh” sound at the end) is likely an anagram of ネギ (negi), meaning “green onion” (also known as “spring onion” or “scallion”).
3 Originally noted in the final chapter of Jaco the Galactic Patrolman.
4 It is unclear whether Toriyama means Freeza was born from only one parent, or emphasizing that only Cold carried these traits.
English Translation: SaiyaJedi
« Previous Page
Translations Archive