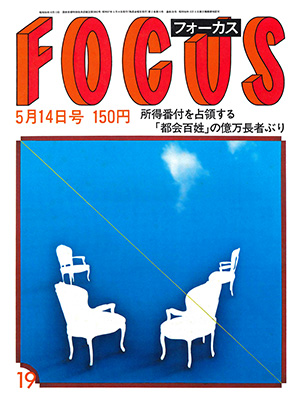 There is probably no one whose life has changed more dramatically over this Golden Week than this man: the creator of “Arale-chan“, Akira Toriyama-san (age 27). The second of this month was his momentous wedding to Yoshimi Katō-san (27) at Nagoya’s Reception House [Teishin Kaikan]. Yoshimi-san is a fellow cartoonist from Nagoya, whom he has been seeing for a little over a year. Quite the opposite of the peerless Arale-chan, Toriyama-san is apparently shy around women. Even at 27, when face-to-face with a girl, his face turns red and he can’t speak well. However, he was able to act naturally around Yoshimi-san. And so, he was attracted to Yoshimi-san, who “has a good personality, and looks after [his] well-being”. When asked about his thoughts on the ceremony, his off-the-cuff answer of, “When I saw her bridal headdress, I thought I was going to burst out laughing, and in her yellow dress for the reception, she looked like a walking curtain,” is perhaps what you would expect of the creator of “Arale-chan“.

The previous day, an event which even he himself “can’t wrap his head around” occurred. In the earnings rankings for 1981, he was by far the top of his category among big names, having made 539,240,000 yen1. Since he was an author-in-training with a monthly salary of 30,000 yen in 19792, that works out to a thousand times what he made two years earlier, and ten times the 55,410,000 he made in 19803. Meaning that in the past two years, he has become a thoroughly rich man. Incidentally, “Arale-chan‘s” home of Dr. Slump has sold about 20 million copies, and its character merchandise numbers some thousands and hundreds of different items. The character merchandise sent to Toriyama-san‘s house wouldn’t all fit inside, so he had even rented an apartment specifically to use in lieu of a storehouse.

This “rich man” has now become quite famous, but he has apparently never liked ostentatious things. For a man of his earning-power, one would expect the ceremony on this day to be held at a first-class hotel in grand style, but they chose this event hall in order to make it as low-key as possible. Even so, they permitted the unanticipated media onslaught to photograph them on the strict condition that it be “only five minutes”. Then, in unusual style, only the groom was present at the post-reception press conference, because he “didn’t want to get her caught up in all the commotion.”

Even now, this “rich man” lives with his parents in Kiyosu Town in the suburbs of Nagoya. Apart from his work, he lives an eccentric lifestyle: not drinking alcohol, he will go to cafes with the allowance of several thousand yen he gets from his parents, build plastic models, or go out to play with the neighborhood kids when they stop by with shouts of “Akira-kun, come play!”

What concerns us poor people more than anything is how he will spend that 539,240,000 yen. However, about 430 million4 of this great sum is taken out in taxes. Even as a bona fide rich man, he thought of these taxes as “harsh”. So, what’s left is a little over 100 million yen5. This was used to buy a 260-tsubo6 plot near his home and build a house on it, so now it’s all gone. For the time being, he’ll be able to continue living off the “Arale-chan boom”, but he won’t be able to rely on Arale-chan forever. “My comic won’t change after I’m married”, he says, but what sort of characters will this “rich man”, who in two years has acquired a mansion and taken a bride, come out with from within the walls of his estate? 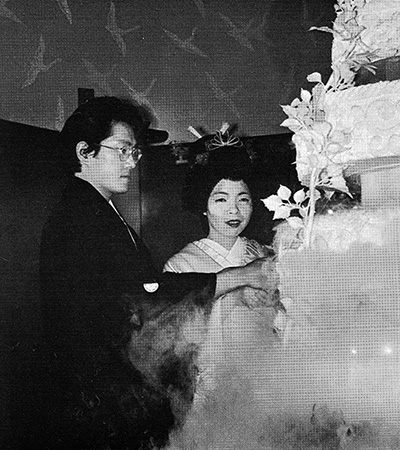 Photo: Shintarō Suda
The following translator notes are included for the benefit of the reader as supplemental information and were not originally published in the book.
1 Roughly $2,275,625 US in May 1982