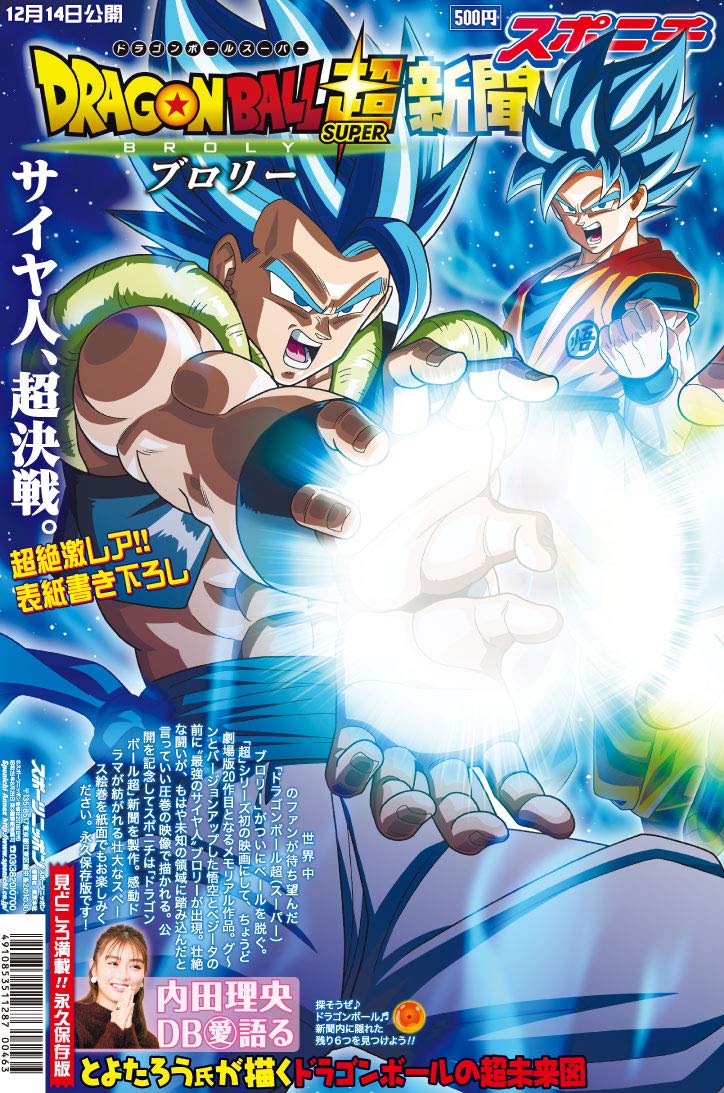 Toriyama-sensei‘s original story is wonderful, so with the intent of putting it into the world of animation without dropping a single panel, I accomplished my personal mission not to change any of the dialogue or add anything superfluous.

Broli, who is also in the title, is a very popular character, so there was an incredible amount of pressure, but in order to make an homage to to the works from back then, I incorporated things like the effects from that time into the production. Furthermore, the Broli from back then didn’t have his personality depicted in much detail, but this time Toriyama-sensei fleshed out the finer points of his inner workings, so I had the privilege of handling it very carefully.

The ludicrously strong Broli is a given of course, but including the battle scenes as well, I believe the production staff poured their all into the making of this film. The only thing I have to say is, “Please enjoy it!” but at any rate Dragon Ball is fun. (laughs) Look forward to it!

There was a lot of pressure, but I challenged myself to bring out in my drawings the image of the Dragon Ball I watched as a child. Unlike the previous movies, I tried adding “shadow” to bring out some variation in both the slice-of-life scenes and the battle scenes, and attempted all sorts of things in order to increase the impact of the battle scenes. In this Broly, there are also “human” scenes where he bonds with Cheelye and Lemo, and I’d like to see him gain a popularity apart from that of the previous Broli. After all, the old Broli was just a dangerous guy and nothing but. (laughs)

You’ll want to see the battle scenes from the second half again and again, and I think you might even have trouble keeping up with them with just one viewing. Even I was pleased when viewing it from the standpoint of an ordinary audience-member. (laughs) In the fight between Goku and Broli on the ice continent, director Nagamine has included some homages to past works, I’d really like for you to keep your eye out for them. Anyway, we’ve made something that you’ll be able to enjoy!

My job was to get the details down for the current movie while using the designs received from Akira Toriyama-sensei as well as the old movies’ art for Planet Vegeta as a reference, so I had the privilege of freedom in what I did.

For King Vegeta’s castle, I had a request from director Nagamine to make it immense, so I expanded the sense of scale further, and gave it its shape with that in mind, using the past version as a base. On top of that, in the story, spaceships land there; I also drew a spaceport from a different angle. With regards to the chamber with the incubation capsules as well, I thought of it as a place where Saiyans are raised, and spent some time tackling it since there were quite a few spots that hadn’t been drawn before. In that sense, while it keeps to the style of Dragon Ball series past, I think I’ve probably been able to express a breadth to the Dragon Ball world that wasn’t there before. Well anyway, I want the people who’ve seen it to tell those who haven’t seen it by word-of-mouth. I believe that this movie is a lot of fun, after all!

I was instructed that I could change things completely from past Dragon Ball art, so I had the freedom to do things as I saw fit, aiming for more realism. There was magma in One Piece Film: Z, which was also directed by director Nagamine, and there’s a scene with magma this time as well. The director really loves his magma, doesn’t he. (laughs) I was also instructed, with regards to the minor planet Vampa, that he wanted me to make it hot, so maybe he just likes things “hot”. For Planet Vegeta, I also drew evening scenery, taking the angle of the light into account; King Vegeta’s castle is a particular favorite. With interior of Freeza’s spaceship, the mess hall, and Freeza’s chambers, his spaceship is different between the past and the present, so I drew both versions.

Director Nagamine takes care with the camera-work, so if I draw the art boards as normal, it absolutely won’t be enough. He’ll want to pull the camera a bit farther out, or shake it around, or zoom in and expand. Even if it’s written as “standard” in the director’s instructions, I’ll have to draw it on the large side. I saw the finished visuals, and it was moving around quite a bit this time, too!

I don’t think there will be that many people who pay attention to the backgrounds during the battle scenes, but I’d like for you to also mind the background art when you see it.

The character of Bulma, which my beloved predecessor, Tsuru-san, built up, is something sacred to me.1 I feel that I absolutely mustn’t destroy that, but also that I can’t let my portrayal be nothing more than an impression. I had the privilege of trying to keep that uncorrupted, holy feeling, while bringing out my own take. In the studio, while on the one hand I was like an ordinary viewer, getting excited while being moved by the visuals, I did my best to devote myself to being “Bulma” when I stood in front of the mic. Director Nagamine is the passionate type, so I thought he might have advice about the performance, but there wasn’t anything in particular. From the first take, I played my part without wavering, and when I got the “OK”, I felt certain that I was right for the part.

It’s not often that one gets the chance to to work on a big franchise like Dragon Ball, so seeing my name in the script felt strange, but everyone gave me a warm welcome, which was a real lifesaver. I’ll be happy if everyone who goes to see it enjoys it as well.

When I read the script, I got fired up, thinking, “Now this is Dragon Ball!”

When I first got word of the audition, I was incredibly happy, since it’s a work I’ve liked and have been watching since I was little. I went into the recording studio all psyched-up. Cheelye is a type of character I haven’t played before. I felt strongly that I absolutely wanted to play that role, so when I heard I’d gotten the part, I was truly happy.

The theme of the work is friendship, bonds between comrades, and bonds between parents and children. There really are all different kinds of bonds shown, which I found really touching. The battle scenes go extremely hard as well, which had me on the edge of my seat, like, “When strong opponents go at it, this is what happens! They’re going all-out!!” (laughs) Plus, you can really feel the staff members’ passion in the facial expressions and the large amount of cuts… it really made me reflect on how glad I was to be involved with this movie.

I think that both the generation that grew up watching Dragon Ball like I did, as well as all the new fans who will truly come to know this work now, will be able to get completely wrapped up in it!

The characters that Toriyama-sensei draws show such varied emotions. In this film, where serious battles go on and on, my character, Cheelye, takes on the role of an ordinary person who puts you at ease. She’s a bit of a bad girl, but she’s really cute, too. (laughs)

In terms of her relationship to Lemo, at first she doesn’t call him “Lemo-san” politely, but uses the sort of language that shows the hierarchy in the world of delinquents, like “Big bro! Big sis!” (laughs) But as she overcomes her difficulties, she forms the kind of relationship where she can address them without an honorific at all. And precisely because Lemo is an adult, he accepts all of Cheelye’s youthful outbursts, and takes her meaning. He was incredibly fatherly, or rather, was a sort of presence who could take on the role of a parental figure, like a mentor. (laughs)

■ LEMO — TOMOKAZU SUGITA
“Though he hurls abuse, he has a warmth not found in a villain”

Dragon Ball is a vital work for me, the first one that I encountered during my childhood that made me think about differences in power and strength. To me, it held the place of a kind of teacher when I thought about “what it means to have power”. You graduate from it at some point, but I’m sure that even when you reread it as an adult, there’s a lot you can learn from it with your perspective at that time, and I think each reader will probably automatically feel a variety of things. Incidentally, the Saiyan-exclusive mentality of “anything’s fine as long as you get to fight” was just a little bit scary to me as a child. (Quietly)

With regards to Lemo, who I played, had thought he might be the kind of role who tries to escape via underhanded means, only to be taken down by Broli. Instead, I was delighted to find him depicted as someone who held opinions from a different point of view, who complemented the irregular power that was Broli. You can’t talk about Broli just by using the opinions of other strong people to express his power; to put it plainly, I think the point of view of the weak is necessary. Lemo, who though lacking in power, accepts Broli with a warm heart, and Cheelye faces Broli’s power without any pretense. My impression that Lemo achieves a balance with Cheelye. In playing him, though he does put things coldly or hurl abuse, I was careful not to make him sound like a villain. At the root of Lemo is kindness. He’s a wily but warm-hearted character, so I paid attention to that aspect of him.

When you see the movie, I’d like you to come to the theater with an open mind, knowing as little information as possible. For instance, if one day, an unknown power like Broli appeared before your eyes, you’d be amazed, wouldn’t you. I also wonder whether, when you saw movies as a child, at that cognitive level, did you study something, get something, or prepare yourself in some way before going to the theater? I’d much rather have you look forward to that sudden amazement when you see it. I kindly ask your cooperation.

The following translator notes are included for the benefit of the reader as supplemental information.
1 The late Hiromi Tsuru played Bulma from the character’s original appearance in 1986 until her passing in 2017.
English Translation: SaiyaJedi
« Previous Page
Translations Archive