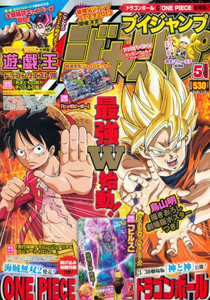 The greatly excited duo give the fastest review of the new movie!!
Alright. So, now that the two of you are fresh off seeing the movie, we’d like you both to give your thoughts about Dragon Ball Z: Battle of Gods!
Naho Ooishi (henceforth “Ooishi”): My pleasure!

Toyotarō (henceforth “Toyo”): And mine!

Now then, I think the two of you were looking forward to it; how was it?
Toyo: Ever since the movie was announced, my head has been bursting with these incredible fantasies. But it betrayed all of them, in a good way! That’s how it feels. While building on the parts that are, in a way, typical for Dragon Ball movies — for instance, “a powerful foe appears, and they combine their strength to defeat him!” — it creates something different from there, I guess you could say… I was quite surprised.

Ooishi: In Dragon Ball, the ten years between the “Majin Boo arc” and the final chapter just go by, don’t they. During that time, there must have been a variety of things that went on with Goku & co.… I had figured as much, but just the fact that it’s showing us a piece of that, you could say it’s overwhelming!

The point of building on a variety of events and introducing a new concept was interesting, wasn’t it.
Ooishi: The contents are extremely simple, easy for even little kids to understand. And yet, it hits the pressure point to move the fans… I’m a fan myself, but it feels like, “With this much included in it, I feel nice and satisfied!” (laughs) 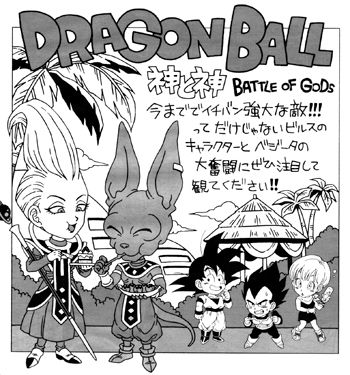 DRAGON BALL: BATTLE OF GODS
Please watch and keep your eyes out for the character of Beerus, who isn’t just “The mightiest foe up to now!!!”, and Vegeta’s great struggle!!

Vegeta’s efforts are the best. Especially that dance. (laughs) — by Naho Ooishi

What are their “points to watch out for”?!
The battle scenes certainly were incredible!
Toyo: No mistake, we got to see the coolest visuals up ’til now, including the TV show!

Ooishi: Or rather, Beerus…!! (laughs)

Oooishi: He’s very Toriyama-sensei, a character where “simple is best”. Even so, I was surprised.

Regarding “Super Saiyan God”… could you give us your thoughts without getting into spoilers?
Ooishi: That’s hard. (laughs) It’s a surprise. I think everyone will probably be surprised.

Toyo: I got goosebumps at “that secret” of that character in connection with “Super Saiyan God”.

Are the new concepts and the broadening of the world part of the fun?
Ooishi: Yes. In this movie, I feel like there’s a large amount of “affection” depicted, which is rare for Toriyama-sensei. Like, “so there’s that kind of setting, too!” Vegeta is especially irresistible. There’s a not-so-cool part shown as well, but he really is cool!

Toyo: And the Pilaf gang, which will bring back memories for the fans, appears too. Especially, to think Mai would have that happen…! (laughs)

Ooishi: I suppose it might be her “first love”…? This is also one of those rare instances of “affection”.

Toyo: The parts that touch on the finer aspects of Dragon Ball’s history are wonderful, too! For me in particular, I was moved at how they hadn’t forgotten about Vegeta’s younger brother “Tarble”. The feeling of, “That means it’s after that episode,” [i.e., the 2008 Jump Super Anime Tour special] it just gave me goosebumps. (laughs)

Ooishi: And to think “that” person would be the key. “Affection” is depicted here, too.

Toyo: It’s definitely a major point to watch out for. 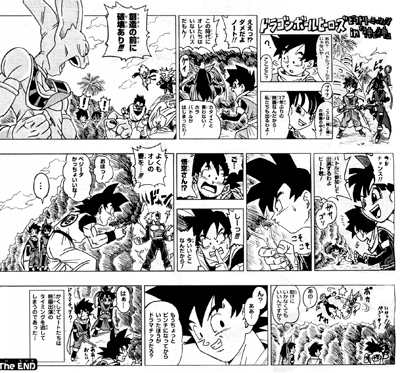 Panel 1
BEAT: What? This isn’t the battlefield… Where are we?
NOTE: Heh heh heh… we’re inside the movie Battle of Gods! It’s the first movie in 17 years… so we’re going to appear too!

Panel 2
BEAT: WHAA?! You can’t do that, Note!! We’re not supposed to be in this Age!
NOTE: Don’t say such uptight things! Look, the battle’s started!

Panel 3
BEERUS: Before creation, there is destruction!

Panel 4
NOTE: Now’s our chance! We’ll participate in the battle and appear in the movie, Beat-kun!
SFX: *rustle*

Panel 7
GOKU: Shhh! This is just getting good!

Panel 10
GOKU: Hm? Ah… But it’ll be more dramatic if I wait until it gets a little more dire, won’t it?

I want to rewatch the climactic battle right now, again and again…!! — by Toyotarō

A message for V-Jump’s readers, if you please!!
Lastly, please give us a message for those V-Jump readers who will soon be seeing the movie!
Ooishi: It’s an incredibly enjoyable movie, with lots of characters from way back when appearing. I drew a Battle of Gods manga over in Saikyō Jump, so I’ll be glad if you could enjoy them together. Personally, I just can’t resist the part of Vegeta’s struggle. Especially that dance. (laughs) And also, it might be good for you pay attention to the both of Beerus and Whis~!

Toyo: The climactic battle scene is just, really exciting. It’s worth seeing it once just for that. I also thought it was wonderful how it’s done so that such a wide age-range, from the new age that first learned of Dragon Ball through Dragon Ball Heroes, to the real-time generation, and even female fans of Vegeta as represented by Ooishi-san, will be able to enjoy seeing the movie! (laughs)

Toyo: The world, or rather, the universe… (laughs)

Ooishi: See the movie as a family, and there’s no doubt that you’ll want to talk to each other about it afterwards!

Both: Thank you very much!