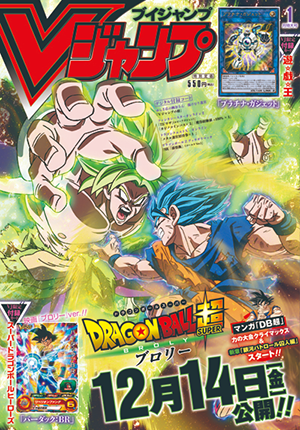 It seems Toriyama-sensei‘s script came first.
That’s right. This story was definitely made by Toriyama-sensei!! So we tried as much as possible to keep all the dialogue the same and do our best from there. We’re standing on Toriyama’s shoulders. But we used our whole bag of tricks when it came to the battles. In other words, we put all our effort into drawing battle scenes that would lend weight to Toriyama-sensei‘s dialogue.
The battles in the TV anime Dragon Ball Super turned out pretty amazing too…?!
I guess you could say the TV series broke through its limits. So in the wake of that, I had to think of what I could evolve to make the battles even more intense. It sounds pretty crap to say “here’s another limit break” right after the last one, so I figured I’d just go crazy with it. What made things easy was that Toriyama-sensei‘s script constantly escalates, so with each escalation I could throw in a transformation to pump up the battle. Beyond that, I personally wanted to make Super Saiyan Blue look crazy strong, and to clearly show the gap between it and Super Saiyan God. The two of them have rather different fighting styles: God relies on predicting and dodging the opponent’s movements, plus godly techniques rather than power. Then Blue puts all the emphasis on bulldozing the opponent with brute force.

With the final battle and such, the animators got a little carried away; they ignored my storyboards and just drew whatever they felt like (laughs). All the animators are incredible, which means they all came up with incredible animation beyond anything I was expecting. There were cuts that were so amazing they were simply beyond my comprehension, so when checking them all I could do was go “Wow!! OK!!” and wait for the footage to be completed. And once the completed footage came in, it was even further beyond my imagination!! I just feel like a spectator at this point! This time there’s nothing but unimaginable battles that break all limits.

They sure sound like some incredible battles if even the director couldn’t predict them (laughs).

[caption for full-body Broli] The movie this time features a new appearance by Broli, who was popular in previous films.

[caption for screenshot of Broli’s face] “When the female Broli, Kale, appeared in the Dragon Ball Super TV show, I watched the Broli movies a bunch of times; it sure came in handy!” (Nagamine)

[Child Broli] Broli was exiled from Planet Vegeta as a child and raised on a frontier planet.

[Goku and Broli] The pure Saiyan Broli clashes with the Earth-raised Saiyan Goku!!

What thoughts guided the depiction of the Saiyan warrior race’s pride?

As a director, what were you thinking with your depiction of the Saiyans?
I think this movie starts after they’ve lost their original pride as a warrior race. During the flashback scene, Bardock is really the only pure warrior race Saiyan. The others have all been tamed by Freeza’s army. Despite being from a warrior race, even King Vegeta doesn’t challenge Freeza to a fight or anything like that. Instead he just bows and scraps before Freeza and uses underhanded tactics against his own subordinates. Rather than a warrior race’s pride per se, I think Bardock maintains something of their pure nature. Broli, Goku, and Vegeta left Planet Vegeta as children, so they’ve gone on living with that pure Saiyan aspect intact. Vegeta lived on Planet Vegeta from his earliest memories, so he has princely pride that interferes a bit, but I consider Goku and Broli to be truly pure Saiyans and have depicted them as such. In the original manga Goku may call himself a “Saiyan raised on Earth”, but I think that by meeting and battling the truly pure Saiyan Broli, he feels a renewed sense of Saiyan pride. For me, a pure Saiyan is a beautiful thing, or perhaps I should say it’s invigorating. I think Broli is truly beautiful. That’s why I think this movie might tell the story of the Saiyans’ rebirth.

A final message for all the V-Jump readers looking forward to this.

Even all of us who made the film had fun working on it. At “Showing 0”, the test screening with an incomplete version of the film, the staff got all excited, saying “what an incredible experience!” or “this is the final, greatest battle movie of the Heisei era!!” So even the people making the film got all fired up about it. But kids shouldn’t care about those grown-ups; they should go experience this movie for themselves!!
English Translation: Herms
« Previous Page
Translations Archive