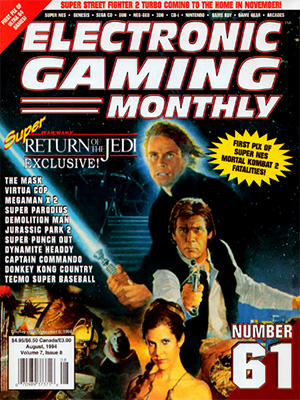 The video game scene is really heating up beyond belief. You’d better believe it, with the NEC 32 FX, Sega Saturn, and Bandai BA-X1 all up and running. At the Tokyo Game Show one could see all of these new products.

The Saturn had a great showing with plenty of games shown on video, and a couple actually up and running.

The NEC 32 FX had two fighting games, Battle Heat and FX Fighter. These use new types of interactive cinemas to play out the rounds of fighting.

The Bandai BA-X was an interesting system. It was pretty much like one of those choose-your-own-path books. A cartoon, like Dragon Ball Z 32 would play, then it would stop and give you a choice of what the character should do next.

■ Photo
Games like this for the BA-X would let you choose the path of your heroes. 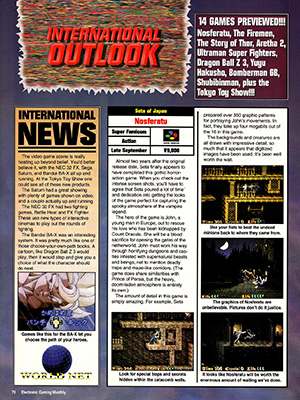 The following historical notes are included for the benefit of the reader as supplemental information and were not originally published in the book.
1 The “BA-X” is the production codename for what would later be released as the Bandai Playdia “Quick Interactive System”.
2 This is not actually Dragon Ball Z: Super Butōden 3 on the Super Famicom; perhaps they had that game in mind due to ongoing and upcoming coverage in the magazine…? Pictured is indeed the first of two Plan to Eradicate the Saiyans Playdia games.
Transcription & Notes: VegettoEX
« Previous Page
Press Archive