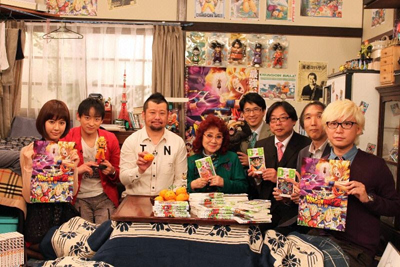 The following notes are included for the benefit of the reader as supplemental information detailing the program and its participants.

Mandō Kobayashi is a program that airs on Fuji TV’s “One Two Next” digital tier network. This particular episode premiered from 10:00 p.m. to midnight on 24 March 2013. Over the course of the program, the various guests pop in to discuss the franchise in general and the new movie, Dragon Ball Z: Battle of Gods. After the movie-related guests leave, there is a Q&A with questions from the host (TV personality Kendō Kobayashi) to Akira Toriyama, who answered in textual format. The remaining guests remain on set and discuss Toriyama’s answers, giving their input into his thinking, or lack thereof.

Hosts
Guests
Questions About the New Movie:
I heard that this is the first time you’ve been deeply involved with the script of a movie; please tell us the reason.
The catalyst was that, first of all, when the script originally came to me, there was a lot of the sort of dialogue that only the creator would know, so I thought, “that bothers me”, and then this and that also started to get on my mind, and so rather than telling them to revise each individual thing, I thought it might be faster if I just wrote the script myself.
Why did you set the movie a few years after the battle with Majin Boo?
It’s because I thought that period would be best in terms of timing, because at that time, everyone’s reached nearly perfect strength; during the Oob era after that, everyone’s gotten too old; and almost the whole cast of characters is there.
What were you particular about in creating the new characters Beerus and Whis?
In terms of things I was particular about, I simply wanted to give them an appearance unlike anything before. I’d done a bunch of various things before, and if they were simply scary, it wouldn’t be any different from those up to now. So what I wanted was to give them flaws in amongst that fearsomeness, or rather, to make them characters where you could feel their humanity.

Please tell us about the lives of the characters after [the end of the series]. (Particularly Yamcha, Tenshinhan, and Chiaotzu.)
First, a word of warning: I am a considerably arbitrary creator, so I’ve imagined what happens after for these three for the first time just now. The possibility that I have made mistakes about the characters’ backgrounds is great. Proceed with caution.

Yamcha’s Epilogue:
Like you, KenKoba1, he has the dilemma of loving women but not being good around them, so he is still wandering blindly in search of the ideal partner he won’t be nervous around. He’s even worked in a host club, but because of his nervousness, it didn’t go well and he was fired. His livelihood is mainly working together with Pu’er as a freelance bodyguard, but he occasionally goes to Tenshinhan’s to help with the farm, as well.

Tenshinhan’s Epilogue:
Stoic Tenshinhan mainly does farming in addition to his training. He can split into multiple bodies and grow extra arms, so harvesting the crops goes quickly. He was found by Lunch, who fell in love with him at first sight and had been constantly pursuing his whereabouts, and even reluctantly lived together with her; but she wasn’t cut out for farming, and Tenshinhan has no interest in romance, so she left after just a few days. After that, it seems Lunch apparently stops in from time to time.

Chiaotzu’s Epilogue:
Naturally, he helps out with farming together with Tenshinhan, but his work utilizing his telekinetic powers has a reputation for its efficiency, and he is hired at an expensive rate by farmers nearby, so he apparently has a surprisingly large amount of money saved away.

If you could write Dragon Ball over again, are there any episodes you’d want to re-do?
I’m the type who only looks ahead, so I absolutely would not want to rewrite something from the past, but I suppose the story might have progressed a bit better if I had known from the start that Goku was an alien called a Saiyan.
If Dragon Ball were to be made into live-action, what sort of casting would you want?
This is something I also thought about a little bit at the time of that Hollywood live-action version, which came out incredibly amazing2, but in the end, nobody came to mind. If it were back when Jackie Chan was still young, I suppose I would have thought nobody could play Goku but him.
By the way, Toriyama-sensei if you were to appear in it, who would you play?
I think it’s the worst thing to appear in one’s own work3, but if I absolutely had to, I’d prefer to be an inconspicuous audience-member watching the Budōkai.
By the way, how would you feel about Kendō Kobayashi for the role of Yajirobe?
Naturally, I think he would be perfect for Yajirobe. But for some reason, that character had a weak presence in my mind, so I often forgot to make him appear4.
If you could have a wish granted on the Dragon Balls, what would you wish for?
For my family, acquaintances, and everyone to be happy and healthy! …I suppose would be boring. I’d be super-happy if maybe I could have the wish granted of, “Finish up a manuscript just by my thinking of a story!”
The following translator notes are included for the benefit of the reader as supplemental information.
1 “KenKoba” is shorthand nickname for host Kendō Kobayashi, which is created by combining the first parts of his given and family names.

2 This can also be read as “unbelievably terrible”; he seems to have been deliberately playing with the ambiguity in the phrasing, as his later comments about the American live-action film have been much more clearly negative.

3 Akira Toriyama actually appeared (as “Robo-Toriyama”) three times in the Dragon Ball manga (in chapters 3, 433, and 480), and in his second appearance, he was an audience member at the 25th Tenka’ichi Budōkai.

4 Following Akira Toriyama’s response, noting that he often forgets to include Yajirobe, the group discusses the fact that Yajirobe appeared twice on the original tankōbon spine art. A picture of Kobayashi dressed as Yajirobe is also shown along with the question.