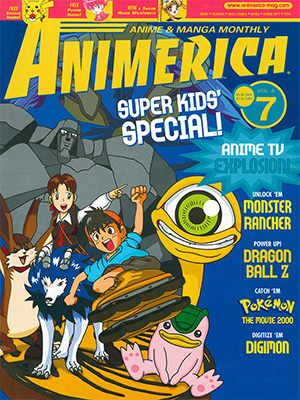 By Any Other Name

Anyone who’s been an anime fan for long enough has probably experienced a debate or two when some new fan innocently asks, “What is the right way to spell (insert name here)?” It’s an understandable question; every web site, piece of merchandise, and book seems to spell characters’ names in English differently. While fans often have strong opinions on such matters, the simple fact is that there’s seldom one “right” way. This is to be expected, especially when dealing with two languages that are so different.

Japanese is a syllabic language that uses three different writing systems: two syllabaries (hiragana and katakana) and ideograms (kanji). This means Japanese people don’t think about language the same way we do. Instead of dividing language into individual sounds like a, b, c, Japanese divide language into syllables, like ka, ki, ku. Okay, so why would this make transcribing Japanese into English a problem? There are many reasons, the biggest being that there are several different “official” methods of transcribing Japanese. Also, like all languages, Japanese does not always sound like it is spelled, especially when it comes to vowels. This creates the dilemma of choosing between written and spoken Japanese when you transcribe into English. Many translators choose to attempt to portray spoken Japanese. Because there are many different ways to try to represent the same sound in English–Vicky, Vickie, and Viki, for example–it’s not surprising that there are many different ways to represent Japanese words in English, too.

The dilemma of choosing between written and spoken is doubled when a name is written in katakana. Why? Katakana is used primarily for foreign words, so when you see a name in katakana, it may well have an English counterpart. Although there are few sounds in the Japanese language that do not exist in English, there are plenty of sounds in English and other languages that do not exist in Japanese! This means that is is very difficult to represent some foreign sounds in written Japanese. Take for example Kaiô-sama’s monkey pal, Bubbles (named after one of Michael Jackson’s pet simians). In Japanese, his name is written ba-bu-ru-su. When you take into consideration that the name might be a foreign word because it’s written in katakana, you have a much better chance of figuring out what the word is supposed to be. Though Bubbles is only two syllables in English, it has four syllables in Japanese because, with the exception of n, all consonants in written Japanese must be followed by a vowel. So each of the four consonants in Bubbles has a separate syllable in Japanese, and the extra syllables end with u. How do you explain Chi-Chi, Tenshinhan and Tsuru Sen’nin? Although we write them with two letters in English, ch, sh, and ts are actually single consonants!

One more complication for translators and editors is deciding how to transcribe Japanese text that represents words in a third language. Since various parents of Dragon Ball are based loosely on the Chinese legends of the original Son Goku, it’s not surprising to find lots of Chinese names in the series. So translators must not only choose how to transcribe these names into English, but they must also decide if they want to use the Chinese or Japanese versions of them. (This also arises in other series based on Chinese mythology, history, or legends, such as Fushigi Yûgi.)

With all these different aspects of language to take into consideration, is it any wonder there are so many different spellings for characters’ names out there? Add to this the often questionable English found on merchandise, and you have a wide variety of spellings to choose from. Various professional, licensed sources have spelled Goku’s best friend’s name as Kuririn, Krillin, Klilyn, Crilin, etc. Which one is right? After all this, I hope you’ll appreciate that there is no single “right” spelling, unless you plan to write in Japanese, not English! 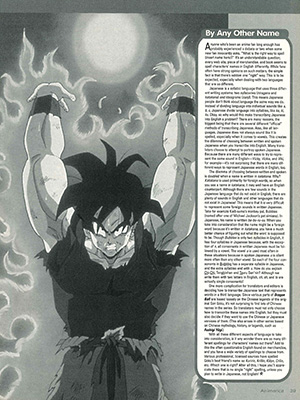