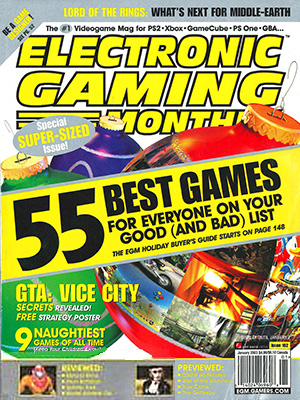 ■ The Good:
Fans of the show will appreciate the attention to detail in character design and story.

■ The Ugly:
Android #19. He embodies all that is just plain weird about DBZ character designs.

■ PHOTO:
One of the more popular Dragon Ball matchups: Frieza versus Goku. A boot to the marauding aliens’ noggin is just what the doctor ordered.

Dragon Ball fans have waited a long time–almost six years since Dragon Ball GT hit the PS1–for the day their favorite series would once again be made into a console game didn’t didn’t require modifying a system and learning to read Japanese. That wait is over, now that Dragon Ball Z: Budokai is entering Earth’s atmosphere at an incredible rate of speed, and with a formiddable Power Level readout (read: Surprise! It doesn’t suck like previous DBZ console games).

As one might expect, Budokai is a 3D fighting game, but it’s not just any ol’ Virtua Fighter. You’ll begin your training in the Story mode, which strolls through the main events of the Saiyan, Namekian, and Android chapters of the Dragon Ball Z saga. The convoluted story’s been abridged, but there are loads of cut-scenes, all using the in-game graphics and character models.

You begin playing as Goku, trying to rescue your son Gohan from intergalactic kidnapper Raditz. That’s where you’ll get your first taste of Budokai‘s combat. The buttons are very simply set up: Punch, Kick, Guard, and Energy. For the most part, you’ll use Energy to throw a fireball at your opponent, but stick it on the end of a punch combination and you’ll throw a Kamehameha Energy Blast (or another more powerful attack, depending on your character) at your stunned opponent. Pull off a couple of those and Raditz’ll be beaten to a bloody pulp. But wait — if you’ve seen the show, you know the battle isn’t over yet. You’ve gotta hold Raditz in front of Namekian warrior Piccolo so he can help you finish him off. To do that, you’ll have to turn one of the analog sticks clockwise or counterclockwise to keep yourself in the blast area while Piccolo charges up. Once he lets loose, Raditz is toast — and uh…well, you are too, though you come back to life soon enough.

That beginning scenario gives you a good idea of what to expect in the rest of Story mode. The action is divided into chapters, but the story doesn’t always progress via one-on-one fights. Sometimes, you’ll have to meet special conditions (deflect a certain number of projectiles, for example). Highlights to look forward to include fighting the mini versions of Cell (you’ve gotta defeat six Cell Jrs. in a row with one life bar) and the battle with the series’ first major enemy, Frieza. You switch characters throughout the game, too; you start with Goku, but change to fight as Vegeta, Gohan, or Piccolo as you progress. Each character controls similarly, but each has his own signature moves (Piccolo has a Ki Blast instead of the Kamehameha, even though it’s almost the same thing).

Even after you’ve finished Story mode for the first time, Budokai‘s not over. You can revisit different chapters and play scenarios not available during the regular game, seeing events from other characters’ perspectives. For example, remember that fight with Raditz at the very beginning of the game? Well, you can do it again, but this time as Piccolo rather than Goku, charging up your Energy Blast by twirling the analog sticks as fast as you can.

In addition to the one-player story, there’s a one- or two-player Duel mode for quick battles, a solo World Match tournament mode against the computer, a practice arena, and an option to edit your fighters’ skills–or buy them new ones. Editing your favorite fighters has its advantages, especially when playing against a friend. “Visiting Mr. Popo’s Skill Shop with enough Zeni to buy capsules allows you to create a character that matches your fighting style,” explains Associate Producer Chris Lundeen. “Are you a better defender? Buy a Senzu Bean to gain full health automatically after being beaten to a pulp. Do you want to inflict maximum damage in one shot? Grab Goku’s Spirit Bomb. If your friend uses a Viral Heart Disease attack (which constantly drains your energy), you’d better make sure you have the antidote!”

Excited? Then what are you waiting for? Hop on the next cloud and get ready to begin your Super Saiyan training.

Since Dragon Ball Z is a very popular anime series, and many fans of Japanese animation like to hear it in the original tongue, we had to ask: Will Budokai feature dual languages? The answer is no. “We decided to include the U.S. voice actors to create something special and familiar to the majority of Dragon Ball Z fans,” Associate Producer Chris Lundeen tells us. “It was something that hadn’t been done on this scale before, and never in a Dragon Ball game. In the end, we had a full disc of dialogue and didn’t have the room for both English and Japanese.”1 Elite fans…you’ll have to buy the import.

When leading up to a Dragon Ball Z game, you’d expect to be treated to a video of the show’s opening right off the bat. After all, what developer wants to spend time redoing the whole intro with in-game graphics? Well… Budokai developer Dimps, for one. You’ll see the fully 3D intro several times when playing through Story mode (or you can skip it if you’ve already memorized all the words to the opening theme).

Loyal Dragon Ball Z fans will no doubt be pleased with the number of characters in Budokai — 23 in all. You’ll start with five characters, and have to play through story mode to unlock the rest of them.

■ PHOTOS:
When you fight Raditz as Goku, you’ll have to hold the squirmin’ bastard into the line of Piccolo’s Ki Blast (top left). But go back into Story mode after finishing it the first time and you’ll face the same challenge from Piccolo’s perspective and charge the Blast instead (bottom left). This is just one example of how the Story mode is extended after you’ve completed it once.

■ PHOTO:
Tapping the Energy button without hooking it onto a punch or kick combo will send out a regular fireball. 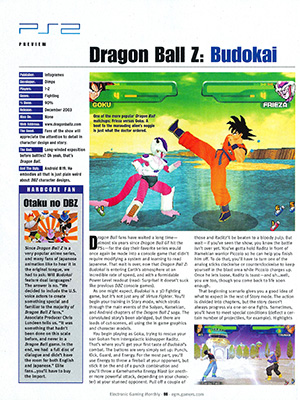 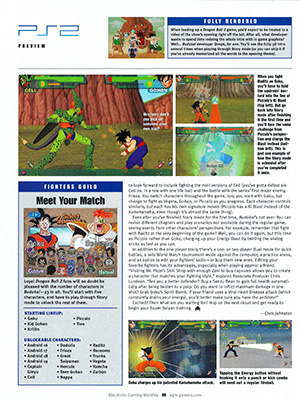 The following historical notes are included for the benefit of the reader as supplemental information and were not originally published in the book.
1 A bit of a marketing lie here. Considering that Budokai 3 — a game with far more characters and recorded dialog — was eventually re-released with a dual-language option, and that all three of the American Budokai game discs actually do have the Japanese audio files on them… well, this just isn’t true. It was likely a development timeframe concern.
Transcription & Notes: VegettoEX
« Previous Page
Press Archive