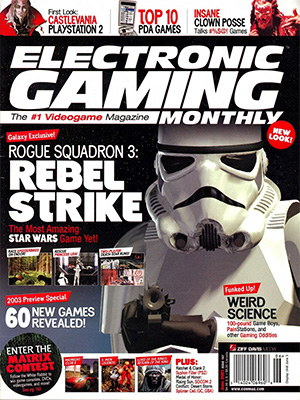 Warning: “ultimate” does not mean “good”

■ THE GOOD:
Being able to turn the power off

UB22 is a first-generation PS1 DBZ brawler originally released in Japan in 1995…and it’s also a steaming turd. The publisher must think kids will buy anything with Goku on the cover, no matter how awful it is. Here, you get a heaping low of slow, stunted, and incredibly bland on-on-one fighting (against the computer or a friend), more akin to game of rock-paper-scissors with amputees than a majestic Super Saiyan face-off. Even worse are the game’s crapulent visuals. The arenas seem as if they’ve been pulled straight out of a third-grader’s diorama project made of poorly painted cardboard, the characters look like paper dolls, and most attacks have two frames of animation (yet still take forever to pull off). I’m not a huge fan of the series anyway, but I’m pretty sure DBZ creator Akira Toriyama could take a dump in a bag and sell it to you for the same price and you’d get more entertainment value out of it.

UB22 reminds me of some generic swap-meet toys I bought as a kid–the characters were recognizable, but as my pals’ ridicule pointed out, something was conspicuously wrong. CJ assures me these dudes weren’t culled from the pages of a dime-store coloring book (even as I clobbered his guys with Majin “wad of gum wearing a diaper” Buu™, mind you), but everything else about the game is third-world. The graphics are a mess, the special moves are unresponsive, the animation is less fluid than a flip book, and the combat lacks strategic incentive.

I can’t blame CJ for his scatacular review–this game is pretty bad. If you ever read a review that says, “DBZ fans may like this game,” they’re lying. No one will like this game. And if you do, please pay me a visit, so I can punch you in the brain. Poor graphics, strategy-less gameplay, an unbalanced fighting system, and moves that work only 50 percent of the time…these things do not make for a good fighting game. Even the generally despised Dragon Ball GT: Final Bout (PS1) is preferable.

■ PHOTO:
Recognize this featureless, barren wasteland from the hit TV show? Neither do we.

■ PHOTO:
If those registered trademark logos weren’t on the screen, we’d guess this was a bootleg. 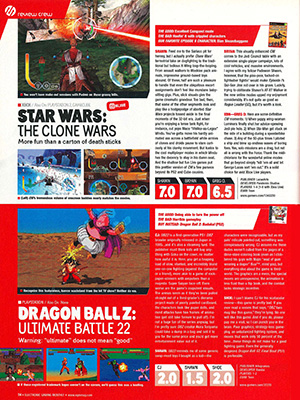