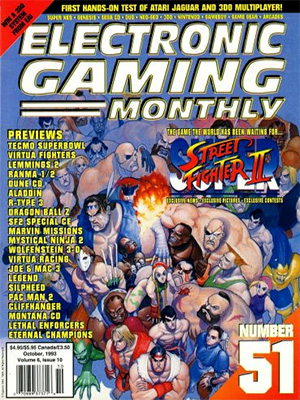 Dragon Ball Z is nothing new to the Japanese. The Dragon Ball game series has spawned various genres like strategy, role-playing, and now a fighting game. What looks to be a mindless one-on-one fighting game is actually filled with tons of techniques, cool characters, and many game options like a story mode, a competition mode, and of course, a two-player game.

For those who simply must own every fighting game out there, Dragon Ball Z makes a terrific addition to the library.

Dragon Ball Z joins the growing ranks of fighting games on the Super NES. The combination of special attacks and finishing moves give players many more choices when fighting through the ranks to the final Boss, Perfect Sell.

Master the Art of Blocking

Dragon Ball Z has a set of “special attacks” that can drain much of your life bar. Block these attacks with keypad and button combos. All of the characters can use basic blocks by 18 Gou and 20 Gou have unique blocks that they can use.

At the opening cinema screen, press these buttons: UP+X, DOWN+B, LEFT+L, RIGHT+R. You’ll hear a tone and you can play character vs. character. Reset the game and enter the code again to access five hidden characters normally unplayable.

■ The Good
The digitized choices are amazingly clear and the nifty “special attacks” are a welcome addition.

■ The Bad
It’s too bad a good game like this may never see the light of day here in the States.

■ The Ugly
Ever want to toast someone from a mile away? It’s remarkable how far fireballs can fly nowadays.

Songoku
Songoku is the best all-around character. The range of his fireballs are unmatched and his strength is among the highest of the group.

Vegita
Vegita is a tricky fighter who uses all of his attacks in a non-stop-frenzy. His two special moves, Final Flash and Big Bang, really pack a wallop.

Jinzoningen 20 Gou
This seasoned fighter has many tricks up his sleeve. Not only can he drain your life power and absorb it to increase his, but he can absorb special attacks too.

Jinzoningen 16 Gou
This warrior is all brawn. His Dynamite Crusher is a dizzying assault, while his Hells Flash is his special attack. Keep away from the Crossguard Bomber.

Picolo
This bizarre character has a very cool Sonic Kick attack and a blinding Eye Beam. His two special attacks are extremely powerful.

Freezer
Freezer is another strange character with some great special moves. The Psyco Kinesis is a surprising attack and the Death Ball is truly devastating.

Jinzoningen 18 Gou
Witness the only female character in the game. Don’t underestimate her because her Energy Ball and Energy Wave will be lightning quick.

Sell
What the heck is this? Sell is a truly unique character with many great moves. He can draw power from goes and fire off special attacks with ease.

More Characters!
Access these normally unplayable characters with the EGM Tip on the previous page. 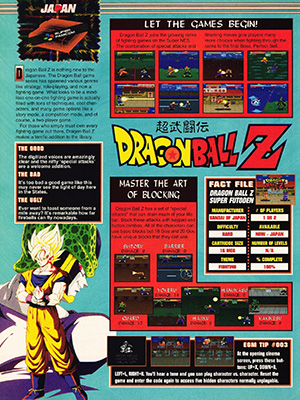 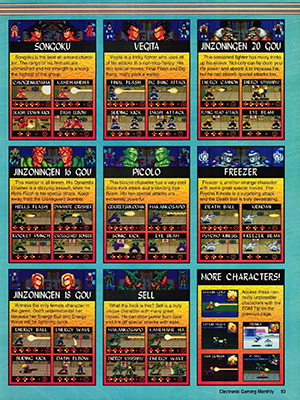