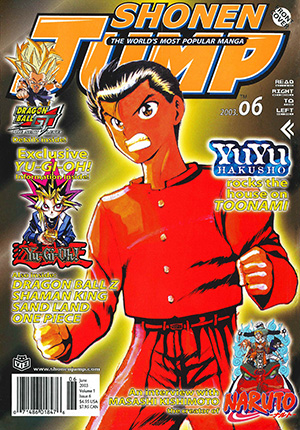 Dragon Ball GT is a continuation of the great Dragon Ball Z story, but fans may be surprised by some of the dramatic differences in the storyline (not that Dragon Ball Z‘s life-and-death storyline isn’t dramatic, too). In an effort to minimize the shock, we’ve outlined some of the new and bizarre goings-on you can expect. We’ve also included some cool Dragon Ball GT drawings by Akira Toriyama that have never been published in the U.S. Despite his limited involvement in DBGT, Toriyama did provide some early creative input for the Toei Animation production and continued to produce some original art for DBGT promotions.1

No Toriyama in the Drama

Yes, it’s true. Unlike Dragon Ball and Dragon Ball Z, DBGT is not based on an Akira Toriyama manga series. If it makes you feel any better, however, the same people who worked on the animation for the original story (or stories, depending on the way you look at it) also worked on DBGT. Also, Toriyama designed the features of Goku’s spaceship and the robot that would later be known as Giru. Originally, the robot was known as the ojama, or “mischief,” robot.

Many U.S. fans are more into the hulking adult goku of Dragon Ball Z than the cantankerous child Goku of Dragon Ball, so they may be taken aback when DBGT shrinks him back down to size. Don’t worry too much about it–the little hero will grow up again, and eventually transform into Gogeta (the result of fusion between Super Saiyan 4 Vegeta and Super Saiyan 4 Goku).

The characters from DBZ have been getting on with their lives in the lost years before the start of DBGT. Gohan, for example, married Videl at the end of Dragon Ball Z and had a child named Pan. Pan, who was only a minor character in DBZ, will play an important role in DBGT–at least in the beginning of the series.

If you’ve already dyed your hair yellow to look more like a Super Saiyan, you’ll be in for a rude awakening when you see their furry, brown-and-red, monkeytastic SS4 manifestation. If it weren’t for the tail, you might assume Goku joined a metal band.

You’ve seen big monkeys–the form Saiyans take during a full moon–in DB and DBZ before, but you haven’t seen the big, yellow monkeys, have you? We didn’t think so. The giant yellow monkey actually represents a stage between Super Saiyan 3 and SS4–which is why it sports the stylish SS “banana” hairdo. Of course, the SS4 versions of Goku and Vegeta don’t have yellow hair. If you want logical steps, perhaps you could do the math homework you’ve been putting off.

As DBGT begins, Vegeta is well on his way to cranky-old-man status. Actually, he’s always been cranky, and now he was a cheesy mustache. He’ll shave it off later in the series, however.

The heroes of Dragon Ball Z came to rely on the Red Star Dragon Balls to bail them out of trouble in the past. Perhaps they relied on them a little bit too much–the overtaxed orbs (beleaguered balls?) are now loaded with negative energy. Instead of summoning a helpful green dragon, they conjure an evil, blue, cigar-smoking monster. To make matters worse, the creature uses the balls to create seven more rotten dragons that our heroes will have to fight in subsequent episodes! 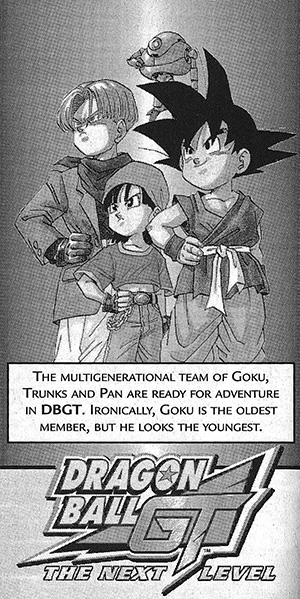 The following historical notes are included for the benefit of the reader as supplemental information and were not originally published in the book.
1 All of which we have outlined right here in our “Production Guide” section “Toriyama’s Contributions to the Anime“!
Transcription & Notes: VegettoEX
« Previous Page
Press Archive