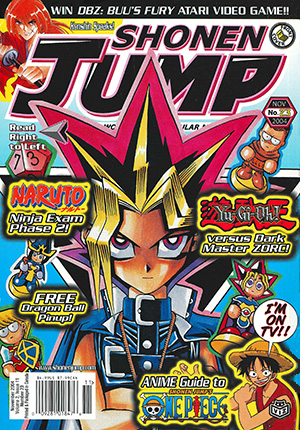 The sky is blue, the mountains stand high in the distance, we’re suspended almost 300 friggin’ feet in the air and screams of “Kamehameha!” echo from… a TV set?!?

No, we’re not battling it out above the stark Cell Game playing field in the middle of the desert. We’re way high up in a snazzy hotel suite in downtown San Francisco, talking at length with Daisuke Uchiyama, Chief Producer of the Budokai series of Dragon Ball Z video games.

Uchiyama is demoing the third in the series, challenging fellow Bandai game producer Ryo Mito to several matches in order to showcase some of the 40 characters you’ll get to control when the PlayStation 2 game launches Nov. 16. (It should be available in stores by Nov. 23.) First it’s Goku versus Piccolo, then Buu versus Goku, then Goku versus… Goku? The game play is fast. Uchiyama singles out teleportation as one of the cool new combat routines, as Piccolo leaps about like a Namekian jumping bean. Other cool new features include Bukujutsu Flight, Teleportation Tornado Combo and Dragon Rush Attack. The characters hail from Dragon Ball Z, the DBZ movies and Dragon Ball GT, making for a grand “tournament of champions” that’s separate from creator Akira Toriyama’s storyline.

The cumulative impact of these game-play enhancements evidences years of development, building on the original Budokai (released in Dec. 2002) and the second title (Dec. 2003). Furthermore, Budokai 3 takes place against newly realistic backgrounds. While the characters retain their anime-derived, line-drawing style, the backgrounds are CGI beauties. “American fans wanted something more realistic, with more atmosphere,” explains Uchiyama. “The anime-style backgrounds are flat, by comparison.” He also says that in contrast with Budokai 2, in which all the characters moved the same way, in this version they all have their distinct physical sensibilities. Watch pink and bulbous Buu shimmy in his diaper-like shorts and you’ll know exactly what he means.

At 31, Uchiyama has been with Bandai for a decade. He’s also worked on PlayStation games for such SHONEN JUMP titles as Naruto and Shaman King, though none of those are available in the U.S. (We can dream, can’t we?) Asked whether he thinks these anime-style action heroes can compete in the age of increased hyperrealism in video-game graphics, Uchiyama responds with confidence: “In my opinion, the increased realism of the characters is not preferable. I’m not denying that the game industry is going in that direction, but I believe the player can play with the anime characters and develop them in their mind.”