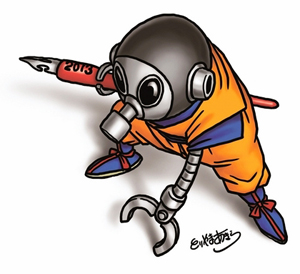 In the first half, the spotlight shines on the everyday life of Son Goku’s son, Son Gohan, who wants to live an ordinary life but can’t, as well as the first Tenka’ichi Budōkai in a long time.

In the second half, Majin Boo makes his appearance in the mortal realm at last. It’s a string of battles intense enough for even me, the person writing the comic, to get sick of. Now that I’ve become an old man with high-ish blood pressure and a taste for things mild, I can’t draw these sorts of battles anymore. Or rather, I’ve lost the will to draw a battle manga from here on out.

Boo and the Saiyans, who keep transforming to become stronger and stronger, and — to give out spoilers — the Genki-Dama at the end, are parts to watch out for.

But as an author, I greatly prefer trivial character interactions. In particular, it was electrifying drawing the silly character Mister Satan contributing to the victory.

Lastly, please be moved at the masterful performance of Masako Nozawa-san, who performs the admirable feat of switching instantaneously between the voices of Goku, Gohan, and Goten.