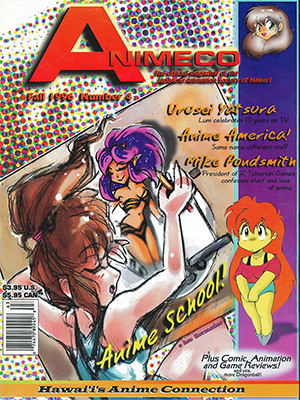 Dragon Ball Z has long been an anime series that showcased gigantic fireballs, meteor smashes, and many other great looking moves. Over the past 4-5 years, Bandai has brought out about 7-9 Dragon Ball Z fighting games. A few of these appeared on the Super Famicom, one for the PlayStation, and one for the Saturn.

This version, entitled Dragon Ball Z Legends, has taken a new path in the fighting genre: namely, playing animation or 3-D strategy. The concept is simple, the fighting takes place in a 3-D battlefield. You have your basic Dragon Ball Z fighting tactics, punches, kicks, fireballs, meteor smashes, guarding, etc. You fight in episodic format and when you complete an episode, you sometimes gain new allies. New to this version is a bar in the middle and “Power Balance” on the bottom of the screen. The bar is a tug-of-war life-meter. When the meter reaches your side, the character you control unleashes a Kamehameha, Big Bang Attack, etc, depending on which character you pick. Each character has their own life-meter (represented by a green bar next to their face). When a character has their life-meter down to zero they die. They also have a power meter, which is yellow, underneath their life-meter (this meter determines whether or not you can launch fireballs).

Dragon Ball Z Legends also introduces the Dragon Ball Z fan to 3-on-3 battles! At any given time you can only control one character, but you can switch between characters with the tap of a button. This becomes important when you are controlling a character whose life-meter is down to almost zero. I found that switching between characters really is important to winning a battle; your computer controlled allies do not necessarily fight like you want them to. When you are fighting, you are fighting against only one opponent, but like your characters, you can choose who you want to fight by pressing another button [sic] This is good because you can double team an opponent and pound them into submission!

The main introduction for Dragon Ball Z Legends is okay, but nothing to jump up and down for. Before moving to the next episode you are shown a bunch of scanned and colored pictures from the manga. The graphics during battle aren’t the smoothest or nicest, but they get the job done. The characters are 2-D sprites and the background is in complete 3-D. The sprites are a little jagged, but only when you see them up close. The 3-D battlegrounds are simply okay. The textures used for the ground are a little jagged and sometimes the edges do not line up well. The battlegrounds also have trees and small hills that, when hit, will crumble! When you get the Power Balance meter all the way on your side, you get to watch your character do their trademark moves, using 3-D polygons for the fireball trails, some of the trademark moves, and lighting effects. You can’t skip past these sequences so you might get tired of seeing the same moves done over and over again. Of course, since you gain new allies when you complete an episode, you will have a chance to watch a variety of moves.

There are two game modes, Z Campaign and Vs. In the Z Campaign you fight in “episodes” and gain allies. You can also save your episode standing with the memory card; this requires one block of memory. In the Vs. modes, you pick a team of up to three and battle against a friend, a computer opponent, or watch a battle where it’s computer vs. computer.

The play mechanics are really weird at first, but when you get used to holding up to rush toward your opponent, and down to run (or should I say FLY!) away, you’ll do just fine. You have the usual moves and rush combos that are all explained in the manual.

The sounds are reminiscent of the anime; the voices are the ones you are used to. Pretty much the usual here. The music is decent and repeats, but since you’ll be busy fighting for the Power Balance, I wouldn’t worry about it.

To sum it all up, Dragon Ball Z Legends does what (I feel) hasn’t been accomplished by the other DBZ fighting games, to feel what it’s like to actually fight a trademark DBZ battle! The battles are great and can last quite long; thank goodness for the memory card! The graphics bring that DBZ feel and the 3-D battlefield is done a lot better than Dragon Ball Z: Ultimate Battle 272! Throughout this review I did not mention one thing — that is, you can not do your character’s trademark super moves during the battles. (i.e., Goku can not do a Kamehameha, Vegita can’t do his Big Bang Attack, etc.) This would seem to be a downfall, but you learn to live with it — sort of! That’s the ONLY downfall to this GREAT game! I would recommend this game to every DBZ fan with a PSX. The battles just bring that DBZ feel to this game! Just remember, this 3-D Strategy or Playing Animation game doesn’t play like your usual fighter game; sort of like the previous DBZ games without the trademark moves (during play) and with the loss of the split screen view as in the first three SFC games. Overall, I’d give Dragon Ball Z Legends a thumbs up! On a scale of 1-10, I’d give it a 9 (only because you can’t do your characters [sic] trademark moves!) 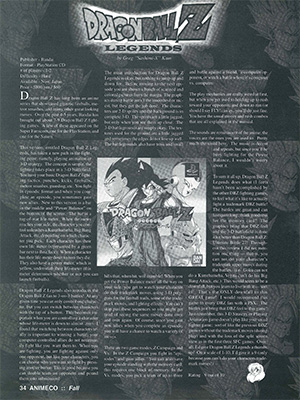 1 A play on the name “Sushi-X”, a pseudonym used by various Electronic Gaming Monthly editors over the years in their review and commentary of fighting games.
2 Entering a code at the title screen on the PlayStation fighting game Dragon Ball Z: Ultimate Battle 22 plays a special movie which unlocks five additional characters, and also changes the title screen to read Ultimate Battle 27.
Transcription & Notes: VegettoEX
« Previous Page
Press Archive