Originally teased last month in V-Jump, the “Anime Comics” — colloquially referred to as “animanga” — version of Dragon Ball GT has begun in the January 2014 issue of Saikyō Jump released earlier this month Japan. 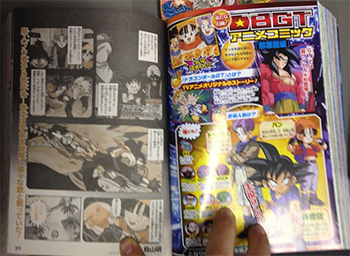 None of the original advertisements for the animanga made any indication of where in the series it might pick up with. It has, in fact, begun with the very last arc of the series: the “Evil Dragon” arc. Chapter 1 (“Evil Dragons Arc, Part One: An Evil Dragon Appears!”) covers Dragon Ball GT episodes 47 and 48 with a few panels at the very beginning from the earlier part of the series.

Goku & co. have gathered the Dragon Balls to undo the damage wrought by the battle with Super No. 17, but instead of the usual Shenlong, a strange Dragon cloaked in black smoke appears and mocks them, refusing to grant any wishes. He sucks in the Dragon Balls and swallows them, then splits into seven Dragons that disperse in seven different directions.

The Elder Kaiōshin then contacts them telepathically to berate them about not heeding his advice about relying too heavily on the Dragon Balls. Whenever a wish is made, “Minus Energy” accumulates in them that takes over a century to dissipate, but thanks to Bulma’s Dragon Radar, they have been able to call Shenlong repeatedly over the past three [which should really be “four”] decades, and even pushed the number of wishes that can be made one time to three with Dende’s power-up. This was all too much for the Dragon Balls to handle, and the evil overflowed, creating the Dragon they saw just now.

Bulma objects to the blame being laid on her, since after all, she would not have been able to gather the Dragon Balls in the first place if Goku had not been with her. Sensing that the current situation is at least partially his fault, and mindful of the warning that the Earth and even the surrounding Galaxy will be destroyed if nothing is done, Goku vows to go beat up these Evil Dragons and take back the Dragon Balls. Meanwhile, as natural disasters occur all over the world, the first Evil Dragon [Liang Xing Long, the Two-Star Dragon] rears his head. 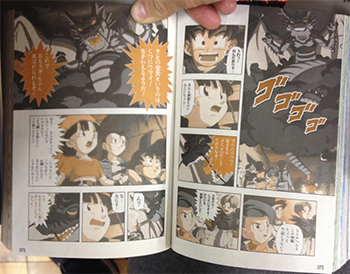 This ties in with the story arc used as the basis for the “new chapter” of Dragon Ball Heroes in Japan, which kicks off the new “Evil Dragon Mission” updates with the Evil Dragons and an adult, GT-styled Gotenks. The spin-off manga Dragon Ball Heroes: Victory Mission, written by “Toyotarō” and published in V-Jump each month, is also currently moving into this update and story arc.

Dragon Ball GT now has a reputation for picking up in seemingly-random parts of the series, with FUNimation originally skipping the first 16 episodes of the TV series back in 2003 and later releasing them as “The Lost Episodes”.

The January 2014 issue of Saikyō Jump, which also contains the 24th chapter of Naho Ooishi’s Dragon Ball SD since its monthly reboot, is currently available at CDJapan and Amazon Japan.