Your one and only Dragon Ball podcast! 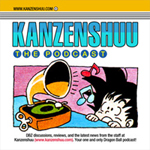 Our weekly podcast[?], then named Daizenshuu EX – The Podcast, began in November 2005 as a new way to reach out to our audience, extend that audience, and simply have fun with the franchise we love so much. Though we updated the name to Kanzenshuu – The Podcast in April 2012 with the launch of this website, we remain the best, most authoritative, entertaining, and only Dragon Ball podcast you will ever need!

Each episode, the Kanzenshuu staff discuss the latest news in the world of Dragon Ball from across the globe before heading into a core topic — whether it be an in-depth discussion of the way in which the story and franchise was produced, theories for in-universe scenarios and “What If?” scenes, interviews with those actually involved with the franchise, thorough reviews of video games or home video releases, we have you covered! We wrap things up with the month’s upcoming releases, questions from the listeners, and much more! We regularly have contests, broadcast live (watch our Twitter and Facebook!), and have a great time sharing our love of the Dragon Ball franchise with you all each and every week.

Episode #0077 of the podcast is available for download! Sorry for the slight delay, but hey… you know how it goes this time of year for all of us. This week, we took a look at the ending to DBZ Movie 10 and had a little discussion we like to call… Goku: There or Not?

In a brief recap of the news on the show, it looks like that release of the remastered movies coming out in France will indeed by widescreen (contrary to early reports), and the ending to episode five of “Lucky Star” is karaoke goodness of “CHA-LA HEAD-CHA-LA”.

SHOW DESCRIPTION:
Episode #0077! VegettoEX, Meri, Julian, and Jeff discuss the ending to DBZ Movie 10… Goku: There or Not? We analyze the placement of the story, canon elements, and general fan theories to try and get to the bottom of what actually occurs in this particular scene. May’s releases and your e-mails round out the episode!

Episode #0076 of the podcast is available for download! This week, Jeff stopped by to analyze and discuss volume four of the manga. We all agreed that the series begins to hit it stride with this volume, but how does it stack up to what came before and what comes after? Definitely check it out.

SHOW DESCRIPTION:
Episode #0076! VegettoEX, Meri, Julian, and Jeff review, analyze, and discuss volume four of the manga. Now that the series has hit its stride, how does it compare to previous volumes? News of remastered French movie boxsets, May’s releases, Top 5 couples, and your e-mails round out the episode.

Episode #0075 of the podcast is available for download! This week, we did another round of e-mail answering! Definitely a great batch of questions from everyone. If you ever have questions or comments for the show, we certainly. welcome them and will do our best to answer everything to the best of our ability with the minimal amount of effort and research necessary to make it sound like we know what we’re talking about and still provide a valuable resource :P. Definitely check it out.

SHOW DESCRIPTION:
Episode #0075! VegettoEX, Meri, and Julian catch up on e-mails yet again. From the Son family’s quality of living, to Goku’s hick accent, to generations of fans, to being just another goddamn fanboy, we covered these topics and a whole lot more! We also conclude our DBZ Movie 8 contest and read a batch of hilarious haiku entrants sent us.

Episode #0074 of the podcast is available for download! This week, we took a look at the new CD from last December, DragonBall Z Best Remix 2006 1/2 Special. Certainly an interesting release, it’s not quite a “remix” CD in terms of what the word traditionally means… it’s more of a “re-mix” CD. Listen in for more details. We checked in with Julian at Anime Boston, Jeff stopped by to read some e-mails, and don’t forget that there’s one more week for the DBZ Movie 8 DVD contest! Definitely check it out.

SHOW DESCRIPTION:
Episode #0074! VegettoEX and Meri discuss and review the “DragonBall Z Best Remix 2006 1/2 Special” CD. We check in with Julian at Anime Boston, Jeff stops by to read some e-mails, and we bring back a segment everyone has been asking for!

Episode #0073 of the podcast is available for download! That’s right, two updates in a row… spanning two different days! Whoa! For the show this week, we took at look at the character of Tapion. Who is he, and why the Hell is he so popular for a dude that’s only around for a single movie?! Is it the theme song? Is it the sword? Is it the shoes?! He’s on fire…! In all seriousness, he’s a pretty intriguing character that doesn’t over-stay his welcome, and we certainly had a good conversation about him. Definitely check it out.

SHOW DESCRIPTION:
Episode #0073! VegettoEX, Meri, and Julian discuss the character of Tapion. For someone who is only around for a single movie, why is he so popular? Is it the theme song, the character design, or something else completely? News of a new, quasi-DB animated feature, April’s releases, and voice e-mail round out the episode.

Episode #0072 of the podcast is available for download! This week, we were able to escape death and do the actual review & analysis of volume three of the DragonBall manga. It is certainly one of our favorite volumes from the entire series, so check out what we had to say about it. We also had some good discussions on a variety of other items, so be sure to check out the show notes for links to everything we mentioned. Definitely check it out.

SHOW DESCRIPTION:
Episode #0072! VegettoEX, Meri, Julian, and Jeff review, analyze, and discuss volume three of the manga. What about this particular volume makes it such a classic that brings a giant smile to our faces? Various items of news, April’s releases, and a good batch of e-mails round out the episode.

Episode #0071 of the podcast is available for download! Don’t be fooled, though. This is the “mastermind”, if you will. Let the very fact that I’m posting be proof that the entirety of Daizenshuu EX has been compromised, and the fate of each and every one of you lies in my own devious hands. You know too much. I’m coming for you. Listen for details, and be aware that it very well may be the last thing you ever hear… Definitely check it out.

SHOW DESCRIPTION:
Episode #0071! VegettoEX, Meri, and Jeff discuss some interesting DVD news from FUNimation (is there a potential Spanish-language release coming?), and attempt to continue the manga review with volume three… but things don’t always go as planned… Is this the end of the road for our heroes? Only time (and your listening to the show) will tell!

Episode #0070 of the podcast is available for download! This week, in response to… uhh… responses… that our video from Episode #0068 received, we took a look at fandom, itself. What about the Japanese version flat-out offends some of today’s fans? What would drive these people to such anger? We examined their placement (or displacement, if you will) in relation to the show and other fans, which eventually leads us into FUNimation’s treatment of the show (and their inability to decide whether or not today it should be viewed as “nostalgia” or “new hotness”). Definitely check it out.

SHOW DESCRIPTION:
Episode #0070! VegettoEX, Meri, and Julian discuss today’s fans with regards to the series and the way they view it (both the Japanese version and the English version, in relation to their [dis]placement)… the way FUNimation treats the property (is it “nostalgia” or “new hotness”?)… and more. Our conversation touches upon ideas that cross generations of fans, and moves into an interesting Q&A e-mail session with quite the amusing “fan”.

Episode #0069 of the podcast is available for download! Julian was in town this weekend, so we finally were able to have another local recording with us all together! Good times, good times… This week we discussed all of the various Japanese DragonBall tunes you can find on iTunes. From some special remixes to the “2005 version” CD singles, there’s actually a decent collection of material up for grabs! We also went over a good bit of news, releases, and e-mails… which actually resulted in another mini-topic, where we discussed this apparently well-known parody clip involving something with a “nine” and a “thousand” in it… Definitely check it out.

SHOW DESCRIPTION:
Episode #0069! VegettoEX, Meri, and Julian discuss the Japanese DragonBall music you can find on iTunes. From exclusive remixes to the “2005 version” CD singles, there is a good deal of music you can pick up on the cheap! News, releases, and your e-mails (including a discussion regarding an apparently well-known parody clip involving something with a “nine” and a “thousand” in it) round out the episode. Referenced sites:… and more. Our conversation touches upon ideas that cross generations of fans, and moves into an interesting Q&A e-mail session with quite the amusing “fan”.

Episode #0068 of the podcast is available for download! And it has a special bonus video to go along with it! No, we haven’t become a video podcast… we won’t abandon you. Besides, us sitting around computers with mics isn’t exactly enthralling to watch. No, no! What we’ve done is create a bonus video explanation (or primer, if you will) to go along with our main topic for the week!

This week, we discussed a scene from DBZ episode 101 in which Vegeta (who has just been brought back to life in a package deal via Earth’s DragonBalls) flies over and sees a newly-SSJ Goku with his own eyes, right there on Namek. In case you don’t know… this never happens in the manga. We discussed the ramifications of this scene (how Vegeta should be reacting, how it would change his outlook after coming back to Earth, etc.).

In addition to the topic, we also went over some news, some releases, and hit up a few voice mails. Definitely check it out.

SHOW DESCRIPTION:
Episode #0068! VegettoEX, Meri, and Julian start up a new topic series, discussing inconsistencies the anime creates. For our first discussion, we take a look at DBZ episode 101 where a resurrected Vegeta flies over and sees SSJ Goku with his own eyes… which never happened in the manga. A corresponding slide-show video shows you everything! News, releases, and e-mails round out the episode.

« Newer Podcast Episodes
1 … 35 36 37 38 39 40 41 42 43 44 45 46 47 48 49
Older Podcast Episodes »
Connect With Us
Support Us
Your support for Kanzenshuu is what keeps us going. You can help by donating to us directly, or by shopping online at certain retailers through our affiliate links below. Every bit counts and helps contribute to our server fees and bringing you new site content, reviews, and contest items.