Herms got in a copy of the recently released Super Exciting Guide – Character Volume earlier this month and went through the book to share a wealth of information with everyone. Now that we finally have our own copies of the new books in, it makes sense to more publicly share a little bit of wonderfully hilarious information. 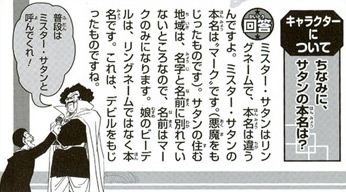 As Herms describes, a Q&A/interview section with Akira Toriyama in the book dives into Mr. Satan’s character. As we have known, the name “Mr. Satan” is really just his “show” or “ring” name (and no, the dreaded “H-word” has no relevance to this discussion). According to Toriyama, Mr. Satan’s actual first name is “Mark”. While it seems like a common name, it is actually written out in katakana as マーク (māku or maaku). If you rearrange the syllables, as you would with many names in the series to derive their puns, you end up with akuma (meaning “devil” or “demon”; you may be familiar with the name as the North American name-change of the Street Fighter character otherwise known as “Gouki”).

Personally, I love the name. While it has a cute, consistent, underlying pun to keep the family in check, the fact that it is such a common-sounding name really fits with how I feel about him. While I do not particularly love Mr. Satan as a character, you cannot help but feel like he is just some poor, regular ol’ guy that consistently gets in way the Hell over his head. “Mark” seems fitting, in that respect.