With a little bit of cautious optimism as Raging Blast 2 inches toward us with an included remake of the feature, we decided it was finally time to take a look back at the original 1993 version of the “Official Visual Guide” for the Famicom game, Plan to Eradicate the Saiyans: 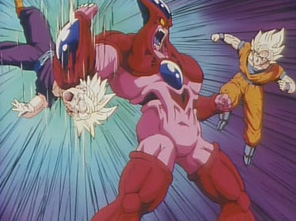 Our buddy Corey joined in on the discussion as we provide a quick history, recap both parts of the feature, and tear it to shreds. To be fair, there are a couple pieces in there that genuinely got us laughing and having a good time, so you will definitely want to listen in for that. October’s news and releases along with your fantastic e-mails all round out the episode. Download the show now, or head on over to the podcast page for more information or to subscribe.

SHOW DESCRIPTION:
Episode #0235! VegettoEX, Meri, and Corey reluctantly dive in to the original 1993 “Official Visual Guide” version of “Plan to Eradicate the Saiyans”. This video strategy guide for the original Famicom game can be viewed as its own stand-alone feature, but should you bother? Is there anything under the surface that could result in a decent remake in the upcoming “Raging Blast 2″…? October’s news and releases, as well as some fantastic e-mails, rounds out the episode.