Earlier in the week the final cover art was unveiled for the upcoming “Full Color Comics” release of the manga and Chōzenshū guide books. With their release mere days away now, Shueisha has launched a “Dragon Ball Project” website covering both releases. 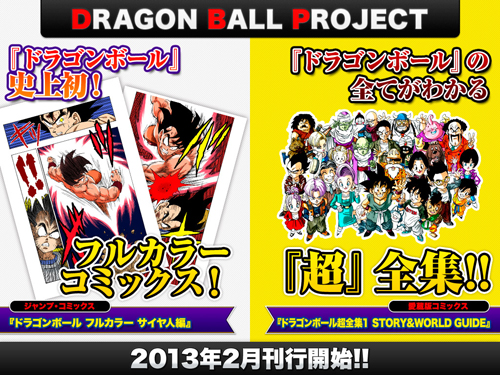 The majority of the information in the “Full Color” section of the website has been recycled, saying the “adventurous battle scenes” will be presented in new “vivid colors”, each volume will contain 17 chapters on 248 pages, etc. So far only the Saiyan and Freeza arc releases are listed, with both now set at a price point of ¥630. However, the Chōzenshū section unveils the names of the remaining guides:

Shueisha has also updated their listings with anticipated April manga releases, which now includes the first tankōbon volume of Dragon Ball SD, the ongoing spin-off by Naho Ooishi in Saikyō Jump. There is no price point listed just yet, nor any other information about how the chapters will be handled — four quarterly chapters were initially released that quickly covered the main story points of the series, followed by monthly chapters which more gradually cover the series.

We will be sure to keep you updated in every area!

9 Comments
Connect With Us
Support Us
Your support for Kanzenshuu is what keeps us going. You can help by donating to us directly, or by shopping online at certain retailers through our affiliate links below. Every bit counts and helps contribute to our server fees and bringing you new site content, reviews, and contest items.