The “Jump Victory Carnival” event is underway this weekend in Tokyo and many Japanese Dragon Ball fans have been tweeting out pictures of a flyer being handed out to attendees for the upcoming Dragon Ball Z movie. The artwork is the same as that used on the movie’s official “teaser” website, with the front of the flyer featuring Son Goku and the back showcasing Shenlong, along with a reprint of author Akira Toriyama’s initial comments about the movie. The only new piece of information is inconspicuously tucked away in the lower right-hand corner of the front of the flyer, listing veteran animator Tadayoshi Yamamuro as the movie’s director. 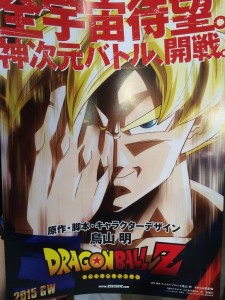 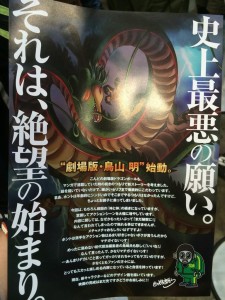 Serving as director will be Tadayoshi Yamamuro, who worked for many years as an animation supervisor for the “Dragon Ball” anime series.

With Tadayoshi Yamamuro becoming Toei Animation’s “go-to guy” for anything Dragon Ball-related in the past, including acting as the character designer and chief animation supervisor for Battle of Gods, it is unclear what will be happening with the animation supervisor position for this film. More than likely it will be filled by another animator, as opposed to having Yamamuro perform both roles, but nothing has been officially announced as of yet. Yamamuro has previously only provided direction for the opening and ending animations in Dragon Ball Kai, so it will be interesting to see how he adapts to a much larger, and more important, project such as this.

Thanks to JacobYBM for forwarding the Oricon article onto us!