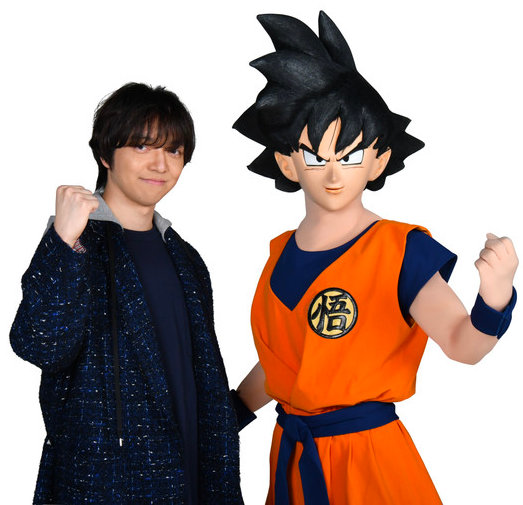 The main theme will be performed by Daichi Miura, and the title is set as “Blizzard”!!
Daichi Miura has been praised as “a genius” and “the Japanese Michael Jackson” for his exceptional singing and dancing ability, and has received high marks both in and out of Japan as a creator and dancer. This movie’s theme song, “Blizzard,” which was finished up after Miura made a deep reading of the script, has as its theme “a world of ice,” which appears as the setting where Goku and Vegeta face off against Broli.

The song, written/performed by Miura and composed/arranged by Nao’ymt, will receive a CD single release in Japan 19 December 2018. Various editions of the CD single will be released, including those with Dragon Ball cover artwork, a bonus DVD, and a B3-sized poster; these editions are available to pre-order on CDJapan and Amazon Japan.

Our generation watched Dragon Ball in animation; by the time we were old enough to understand the world around us, it was already a given that it was loved the world over. Goku’s charm is in how, when he runs up against something gigantic that’s even stronger than him, he gets excited to overcome it. I believe that kind of mindset is really amazing.

In this movie as well, the Saiyans Goku, Vegeta, and Broli each have their own obstacles that they must overcome, and how they go about overcoming them is depicted. In addition to those characters’ sentiments, I’ve also used a “world of ice,” which appears as the setting of the battle this time, as a theme.

In modern society, too, we normally live as though confined within a “block of ice,” surrounded by all kinds of information. When we rise above something, what should we do in order to break through the ice and become who we really are? I felt that that was the universal theme that connects to both the movie’s characters and to modern society, so I wrote the lyrics with that aspect in mind.

To have my own music playing within one of the works I encountered as a child is something that truly makes me happy. I believe it’s come out as a piece of music that, when you see the movie, will make you think “that was good” when you leave the theater, so I’d definitely like you to look forward to that.

… as did a comment from film producer Norihiro Hayashida:

When this movie was set to go into production, we were given the proposition to “create a work with the foreign market in mind from the very start.” Naturally, we had to keep that in mind with respect to the artist for the theme song as well, and the very first person we came up with was Daichi Miura-san. His great singing ability and agile dance moves are truly world-class, and are recognized by many well-known creators both in- and outside Japan. Dragon Ball is also popular all over the world, and thinking that they might be able to create a synergistic effect, we went and made an offer. We met directly with Miura-san and held a planning conference, and he had already thoroughly read through the original comic and the script, and all the questions we got from him were right on point, leaving us impressed by his sincere stance toward the craft. This time, we also asked him to write the lyrics, and thanks to that, it came out very well-matched to the world of the movie, and we are extremely pleased with it. So as not to lose out to Miura-san‘s theme song, we intend to make the movie itself just as solid.

The story, script, and character designs for the film, formally opening nationwide in Japan 14 December 2018 in 2D, IMAX, and MX4D, are being crafted by original manga author Akira Toriyama. The film will be directed by Tatsuya Nagamine, and will feature animation supervision by Naohiro Shintani along with art direction by Kazuo Ogura. The film will receive international distribution following its Japanese debut. A world premiere is set for 14 November 2018 at Nippon Budōkan with special guests set to include Masako Nozawa, Ryō Horikawa, Ryūsei Nakao, Bin Shimada, Katsuhisa Hoki, Tatsuya Nagamine, and now also Daichi Miura.