In today’s January 2019 issue of Shueisha’s V-Jump magazine, the Dragon Ball Super manga officially kicks off an original “Galactic Patrol Prisoner” story arc at the end of its forty-second chapter. The chapter was also simultaneously released in English from Viz, available digitally on the company’s Shonen Jump website.

Following the completion of the Universe Survival arc and its Tournament of Power (as seen in the Dragon Ball Super television series), Toyotarō’s manga provides a brief glimpse of Broli, noting that said story (from the forthcoming theatrical film) is for another time, before diving into an original story arc involving the Galactic Patrol.

Some time after the events of the Tournament of Power, Goku and Vegeta receive an urgent call from Bulma: Mr. Satan is requesting assistance against a group that has arrived to kidnap Boo. The group, armed with ray guns, are loading a fast-asleep Boo onto their spaceship when Goku and Vegeta arrive. Goku attacks the ones near Boo, but the apparent leader of the group makes a sudden move and stuns both Goku and Vegeta with their gun; these two will be helpful, so they will be brought along to headquarters. Goku and Vegeta awaken to see Jaco, confused as to why “Merusu” brought them both when Boo would have been sufficient. Due to their negligence, a formidable foe has broken out of of the Galactic Penitentiary, and they require the assistance of someone who resides within Boo: the Dai-Kaiōshin. 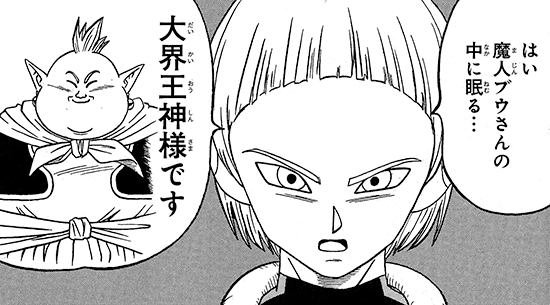 Alongside hyping up Broli, Jiren, and this new prisoner, V-Jump‘s official website is hosting a voting campaign for Goku’s greatest battle, where visitors have a chance at receiving Toyotaro’s special image of the prisoner: 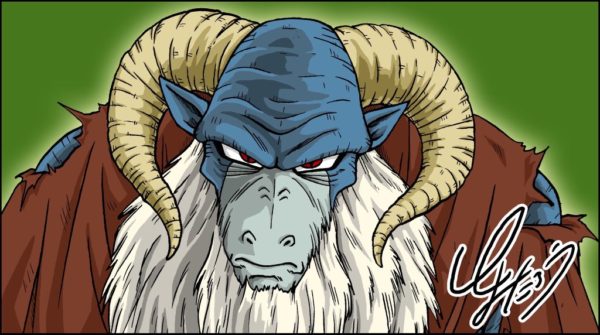 The official website provides a brief tease of the upcoming story arc:

Goku vs. the Mysterious, Formidable Foe: “The Escaped Prisoner”
A mysterious foe who appears in the new chapter, the “Galactic Patrol Prisoner Arc”! Just what is it about this felon who escaped from the Galactic Penitentiary…?

The Galactic Patrol debuted in Sachie-chan GOOD!! from Akira Toriyama and Masakazu Katsura (published in the May 2008 issue of Jump Square that April), followed by Jiya (published over the course of three issues in Young Jump from December 2009 to January 2010); the two were collected in 2014’s Katsura Akira volume. Toriyama branched out on his own with 2013’s Jaco the Galactic Patrolman, a semi-stealth prequel to the Dragon Ball series.