In conjunction with Jump Festa this weekend and the February 2019 issue of V-Jump released earlier this week, Bandai Namco has revealed the new antagonist “Shiirasu” coming to Super Dragon Ball Heroes: World Mission on the Nintendo Switch, due for release in Japan 04 April 2019:

As previously revealed, the new “Great Saiyaman 3” character appears to help Beat, the game’s protagonist. Meanwhile, Shiirasu appears at the Time Nest, clearly familiar with the Kaiōshin of Time, speaking of “justice” and sporting the Galactic Patrol insignia. 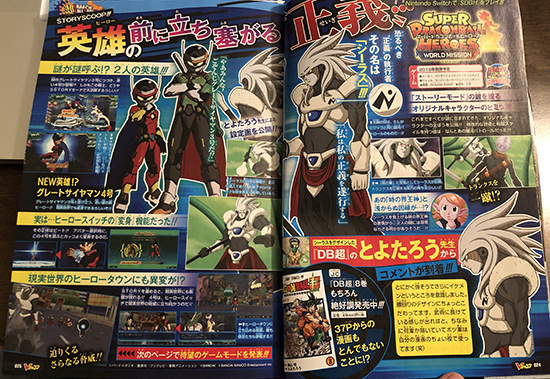 Shiirasu was designed by Toyotarō (Dragon Ball Heroes: Victory Mission, Dragon Ball Super manga), who provided a comment on the character and design in V-Jump:

At any rate, I paid attention to making him look strong and even more handsome. I was especially particular about the design around his waist, thinking it should bring out a sense of him being well-versed in martial arts. Incidentally, I drew several concepts for him, and these rejected concepts I’m using as minor roles in my own comic. (laughs)

Outside of a single test run at San Diego Comic Con earlier this year, no Dragon Ball Heroes content has ever received an international/localized release outside of Japan. World Mission was, however, recently rated by the Australian government’s Department of Communications and the Arts. Online import gaming retailer Play-Asia recently tweeted that the mainland Asia release of the game will feature English subtitles.