Sherry is a new idol group consisting of five women that released their debut CD single, Romantikku Ageru yo, on 22 April 2009. With so many covers and variation on the original Dragon Ball TV series opening theme coming out in recent history (including a new version by the original singer, herself), is there room for yet another one?

The review of this CD was made possible by a generous donation from Louis. If you are interested in contributing to the site, please visit our “Donate” page.

I am happy to report that I had no familiarity with the group (an easy task when they have no material out yet) before our Japanese buddy “kei17” sent me an e-mail at the beginning of March 2008. A new group by the name of “Sherry” would apparently be releasing their debut CD single, and the lead track was going to be yet another cover of the opening theme to the first Dragon Ball TV series. Hardly able to contain my (clearly sarcastic) excitement, I pre-ordered and waited around for it to arrive. 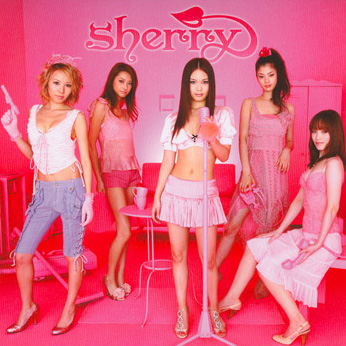 The minimal packaging for the CD mirrors the minimal information and advertising I have been able to find online for the group. Five women, pink colors, and some music. Sure, let’s give it a go.

A 5:21 running time is not going to help the first impression of this cover song, and yet that is exactly what we are given. A longer running-time does not inherently make a better song, something that it seems many Japanese groups struggle with to this day.

Before the first minute of the song is even up, we are introduced to auto-tuned vocals, tiny-sounding electronic instrumentation, and uninspired performances all around. Is there even more than one of these women performing the song? Is it really necessary to get into robotic territory with the auto-tune in the chorus?

That all being said, it is not a complete mess of a track. The slight mix of an acoustic guitar sound is a welcome addition to the otherwise off-putting, electronic sounds. The breakdowns into the choruses mimics the original song just enough to pay tribute and still put a new spin on it at the same time.

Ultimately, though, it is just another uninspired cover of the song, and one that does nothing to stand out in the crowd.

After a disappointing first track, I was hoping that we could go only go up from there. Thankfully, “SEPARATE” brings it home with a much more satisfying end result.

The fact that there is more than one woman singing in this group makes itself apparent. The chorus is a fun and upbeat, if not entirely catchy, throwback to some of the girl power-groups of the past. Unfortunately, the song does not seem to really go anywhere, an ends up relying on the auto-tune from the first song and a standard pop structure to bring it to a close. It is a much more satisfying performance than the title track, but one that still does not really seem worth the effort.

Like many remixes of late, the “ajapai goes to Brazil mix” takes minor elements from the original song performance and places them sparsely throughout entirely new musical backing. Constant repetition and cuts over build-ups in the music are common and persistent, with the blips and bloops being neither interesting nor purposeful.

What I, and I think most people, like about remixes is when the producers take the interesting parts of the original song and bring them into a new context. If all of these elements are stripped away, how can you even consider it a remix of a previous song? It feels more like a new, obnoxious backing song that happens to sample bits and pieces from the original song it claims to be a remix of.

At the end of the day, there is just nothing special about the title track to separate itself (clever, right?) from all of the other recent covers of the song, nevermind the rest of the musical nonsense being released in the grander scheme of things. Fans of the song looking for an updated but faithful performance need look no further than Shoko Nakagawa (her first Anison release from 2007; available on CDJapan) or even Ushio Hashimoto, the original performer of the song, herself (from Inazuma Challenger in 2008; also available on CDJapan).

Sherry – “Romantikku Agery yo” may be available at the following retailers: