The new secret rare card for “Galaxy Mission 4” in Dragon Ball Heroes, the on-going card-based arcade game in Japan, has been revealed as Baby Janenba. 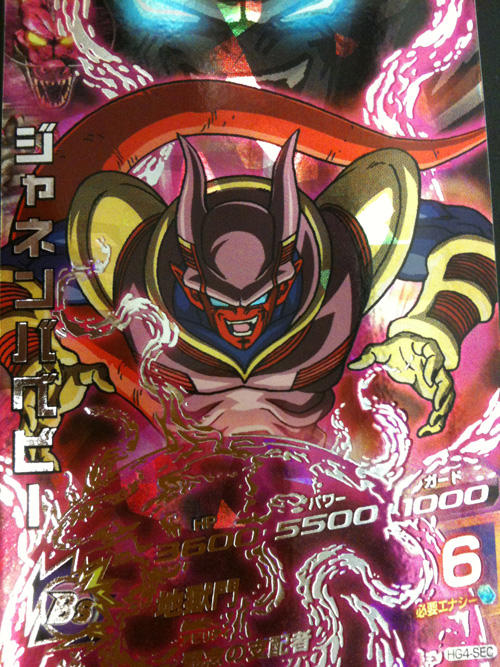 That is, of course, Baby from Dragon Ball GT infecting Janenba from Dragon Ball Z Movie 12, and not a child version of Janenba (though one could argue the gigantic puffy version of Janenba from the movie served that purpose). As with the other secret rare cards (such as the new Super Saiyan forms for characters in past missions), you have a chance to receive the card by playing the game — no word on additional availability at this time.

As always with Heroes, big thanks to our buddy TheDevilsCorpse for the heads-up.

EDIT: Just for an extra bit of clarity, the kana on the card spelling out his name actually says “Janenba Baby” (ジャネンバベビー) rather than “Baby Janenba”, so perhaps that would be a better name-order to go with. It’s not nearly as fun and misleading, though. Additionally, here is a better look at another of the character’s cards from the game’s official website: 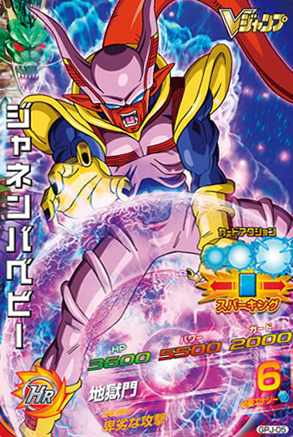 17 Comments
Connect With Us
Support Us
Your support for Kanzenshuu is what keeps us going. You can help by donating to us directly, or by shopping online at certain retailers through our affiliate links below. Every bit counts and helps contribute to our server fees and bringing you new site content, reviews, and contest items.